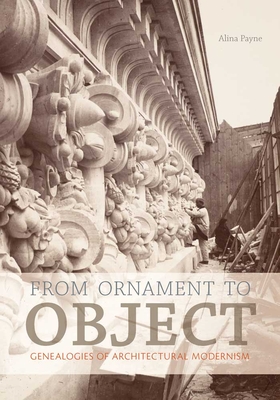 From Ornament to Object (Hardcover)

In the late 19th century, a centuries-old preference for highly ornamented architecture gave way to a budding Modernism of clean lines and unadorned surfaces. At the same moment, everyday objects—cups, saucers, chairs, and tables—began to receive critical attention.

Alina Payne addresses this shift, arguing for a new understanding of the genealogy of architectural modernism: rather than the well-known story in which an absorption of technology and mass production created a radical aesthetic that broke decisively with the past, Payne argues for a more gradual shift, as the eloquence of architectural ornamentation was taken on by objects of daily use. As she demonstrates, the work of Adolf Loos and Le Corbusier should be seen as the culmination of a conversation about ornament dating as far back as the Renaissance. Payne looks beyond the usual suspects of philosophy and science to establish theoretical catalysts for the shift from ornament to object in the varied fields of anthropology and ethnology; art history and the museum; and archaeology and psychology.

Alina Payne is professor of history of art and architecture at Harvard University. In 2006 she received the Max Planck and Alexander von Humboldt Prize in the Humanities. Her books include The Architectural Treatise in the Italian Renaissance, The Telescope and the Compass, and Antiquity and Its Interpreters.

Praise For From Ornament to Object: Genealogies of Architectural Modernism…

"Exceptionally intelligent. . . . From Ornament to Object construes 19th- and early-20th-century architecture in a novel, convincing, and eminently fascinating manner, shedding new light on modern architectural thinking and practice along the way."—Mari Hvattum, The Oslo School of Architecture and Design
— Mari Hvattum

"Important, timely, and original. This book proposes a major revision of the historiography of Modernism, a rethinking of the way ornament has been theorized, and a theory of the architectural object. . . . This will be one of the most important books about ornament, architectural aesthetics, and Modernism to have been written in the past decade or two."—Caroline van Eck, Leiden University
— Caroline van Eck

“Payne has written a fascinating book on the development of modern architecture and architectural modernism…Highly recommended.”—Choice
— Choice
or
Not Currently Available for Direct Purchase
Copyright © 2020 American Booksellers Association