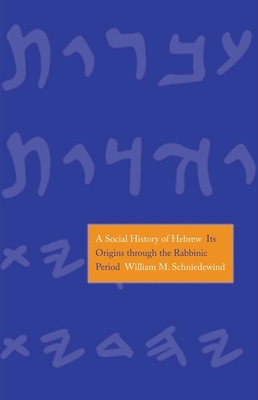 A Social History of Hebrew (Hardcover)

More than simply a method of communication shared by a common people, the Hebrew language was always an integral part of the Jewish cultural system and, as such, tightly interwoven into the lives of the prophets, poets, scribes, and priests who used it. In this unique social history, William Schniedewind examines classical Hebrew from its origins in the second millennium BCE until the Rabbinic period, when the principles of Judaism as we know it today were formulated, to view the story of the Israelites through the lens of their language.
Considering classical Hebrew from the standpoint of a writing system as opposed to vernacular speech, Schniedewind demonstrates how the Israelites’ long history of migration, war, exile, and other momentous events is reflected in Hebrew’s linguistic evolution. An excellent addition to the fields of biblical and Middle Eastern studies, this fascinating work brings linguistics and social history together for the first time to explore an ancient culture.

William M. Schniedewind is Kershaw Chair of Ancient Eastern Mediterranean Studies, Professor of Biblical Studies and Northwest Semitic Languages, and Chair of the Department of Near Eastern Languages and Cultures at UCLA.

Praise For A Social History of Hebrew: Its Origins Through the Rabbinic Period (The Anchor Yale Bible Reference Library)…

“This important book fills a major void in the field of Hebrew studies. Schniedewind paves new ground with this masterful survey of the primary sources, elucidated throughout via recourse to modern linguistic research.”—Gary Rendsburg, Rutgers University
— Gary Rendsburg

“Schniedewind offers powerful illustrations of how Hebrew developed in relation to history. Read this book for stimulating new perspectives on topics ranging from the emergence of distinctive Judean scribal Hebrew in the late monarchy to the resurrection of literary forms of Hebrew in the Hellenistic and Roman periods.”—David Carr, Union Theological Seminary
— David Carr

“William Schniedewind’s erudite study is the story of a protean hero – the Hebrew language, in its changes, journeys, struggles and survival. Schniedewind captivates us with the beauty of Hebrew and illuminates the ancient world through the lens of language.”—Rabbi David Wolpe, Sinai Temple, Los Angeles
— David Wolpe

“An outstanding book for those inclined to reap the social and historical insights about the rise, fall, and rebirth of the Hebrew language.”—Fred Reiss, San Diego Jewish World
— Fred Reiss
or
Not Currently Available for Direct Purchase
Copyright © 2020 American Booksellers Association