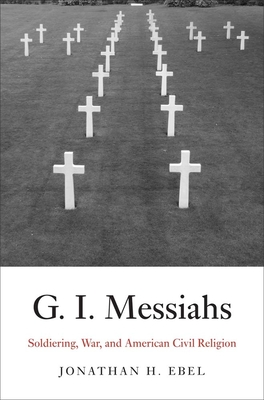 Jonathan Ebel has long been interested in how religion helps individuals and communities render meaningful the traumatic experiences of violence and war. In this new work, he examines cases from the Great War to the present day and argues that our notions of what it means to be an American soldier are not just strongly religious, but strongly Christian.

Drawing on a vast array of sources, he further reveals the effects of soldier veneration on the men and women so often cast as heroes. Imagined as the embodiments of American ideals, described as redeemers of the nation, adored as the ones willing to suffer and die that we, the nation, may live—soldiers have often lived in subtle but significant tension with civil religious expectations of them. With chapters on prominent soldiers past and present, Ebel recovers and re-narrates the stories of the common American men and women that live and die at both the center and edges of public consciousness.

"Jonathan Ebel’s aptly titled GI Messiahs is the odds down finest study of the central role that American soldiers contribute to America’s 'civil religion.' Ebel persuasively demonstrates that American GI’s are literally the incarnation of a Christian tinctured civil religion in which they have come to embody the 'word of the nation made flesh.' Through a series of brilliant case studies, Ebel cuts to the heart of the unique role that soldiers play as the 'second person' of an American national godhead whose first person is the nation itself. Essential reading for anyone interested in understanding the ways in which Christianity forged intimate connections between the military and American society.”—Harry S. Stout, Yale University

“Ebel, like most great historians, has a gift for discovering and narrating the event or person such that it helps us see what might otherwise go unnoticed. But in this case what he helps us see is the reality of the American civil religion, a religion that draws on fundamental Christological analogies, constituted by the American soldier. Readers of this sad and troubling book will hopefully find Ebel’s work profoundly sobering.”—Stanley Hauerwas, Duke  Divinity School

“With humility, grace, and stunning knowledge, Jonathan Ebel shows how soldiers from the Great War to the War on Terror have fought under and sometimes against the burden of civil religious incarnation. From its venturesome opening sentence to its shattering final lines, GI Messiahs is a breathtaking achievement.”— Tracy Fessenden, author of Culture and Redemption: Religion, the Secular, and American Literature

Jonathan H. Ebel is associate professor of religious studies at the University of Illinois at Urbana-Champaign and is a former naval intelligence officer. He is the author of Faith in the Fight: Religion and the American Soldier in the First World War and the co-editor, with John D. Carlson, of From Jeremiad to Jihad: Religion, Violence, and America.
Loading...
or
Not Currently Available for Direct Purchase