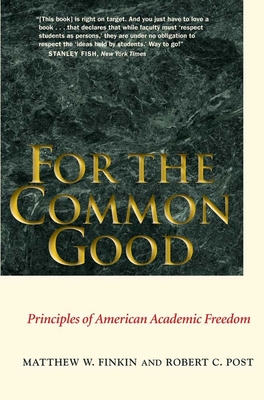 For the Common Good

Debates about academic freedom have become increasingly fierce and frequent. Legislative efforts to regulate American professors proliferate across the nation. Although most American scholars desire to protect academic freedom, they have only a vague and uncertain apprehension of its basic principles and structure. This book offers a concise explanation of the history and meaning of American academic freedom, and it attempts to intervene in contemporary debates by clarifying the fundamental functions and purposes of academic freedom in America.

Matthew W. Finkin and Robert C. Post trace how the American conception of academic freedom was first systematically articulated in 1915 by the American Association of University Professors (AAUP) and how this conception was in subsequent years elaborated and applied by Committee A of the AAUP. The authors discuss the four primary dimensions of academic freedom—research and publication, teaching, intramural speech, and extramural speech. They carefully distinguish academic freedom from the kind of individual free speech right that is created by the First Amendment. The authors strongly argue that academic freedom protects the capacity of faculty to pursue the scholar’s profession according to the standards of that profession.


Praise For For the Common Good: Principles of American Academic Freedom…

“This book is certainly the best and clearest analysis I have read on the theory and practice of academic freedom. It should be required reading for anyone interested in this important subject.”—Derek Bok, The 300th Anniversary University Professor and President Emeritus, Harvard University

"There is no better corrective—or alternative—to the 'corporate' University than this courageous book that redefines the spirit of 'academic freedom' for our times. In recalling the principles of common law and the public good that underlie the ideals of academic freedom, Post and Finkin have held our scholarly profession to its highest standards, and saved us—as scholars and teachers—from the glib and glittering inducements of the intellectual market place."—Homi K. Bhabha, Anne F. Rothenberg Professor of the Humanities Department of English and American Literature and Language Director, Harvard Humanities Center, Harvard University

Matthew W. Finkin is Albert J. Harno and Edward W. Cleary Chair in Law, the University of Illinois at Urbana-Champaign, College of Law. He lives in Champaign. Robert C. Post is Dean and Sol & Lillian Goldman Professor of Law, Yale Law School. He lives in New Haven, CT.
Loading...
or
Not Currently Available for Direct Purchase