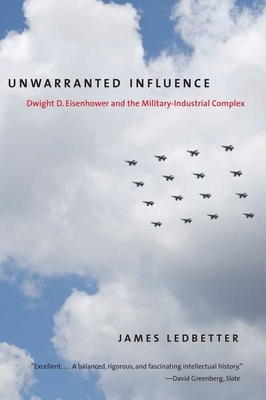 Dwight D. Eisenhower and the Military-Industrial Complex (Icons of America)

A fascinating analysis of one of the most important political and economic ideas of our time: the ties between America’s military and its economy

In Dwight D. Eisenhower’s last speech as president, on January 17, 1961, he warned America about the “military-industrial complex,” a mutual dependency between the nation’s industrial base and its military structure that had developed during World War II. After the conflict ended, the nation did not abandon its wartime economy but rather the opposite. Military spending has steadily increased, giving rise to one of the key ideas that continues to shape our country’s political landscape.

In this book, published to coincide with the fiftieth anniversary of Eisenhower’s farewell address, journalist James Ledbetter shows how the government, military contractors, and the nation’s overall economy have become inseparable. Some of the effects are beneficial, such as cell phones, GPS systems, the Internet, and the Hubble Space Telescope, all of which emerged from technologies first developed for the military. But the military-industrial complex has also provoked agonizing questions. Does our massive military establishment—bigger than those of the next ten largest combined—really make us safer? How much of our perception of security threats is driven by the profit-making motives of military contractors? To what extent is our foreign policy influenced by contractors’ financial interests?

Ledbetter uncovers the surprising origins and the even more surprising afterlife of the military-industrial complex, an idea that arose as early as the 1930s, and shows how it gained traction during World War II, the Cold War, and the Vietnam era and continues even today.

James Ledbetter is editor in charge of Reuters.com. His books include Made Possible By . . . and Starving to Death on $200 Million.
or
Not Currently Available for Direct Purchase
Copyright © 2020 American Booksellers Association