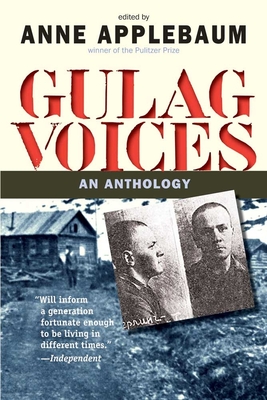 An Anthology (Annals of Communism Series)

Anne Applebaum wields her considerable knowledge of a dark chapter in human history and presents a collection of the writings of survivors of the Gulag, the Soviet concentration camps. Although the opening of the Soviet archives to scholars has made it possible to write the history of this notorious concentration camp system, documents tell only one side of the story. Gulag Voices now fills in the other half.

The backgrounds of the writers reflect the extraordinary diversity of the Gulag itself. Here are the personal stories of such figures as Dmitri Likhachev, a renowned literary scholar; Anatoly Marchenko, the son of illiterate laborers; and Alexander Dolgun, an American citizen. These remembrances—many of them appearing in English for the first time, each chosen for both literary and historical value—collectively spotlight the strange moral universe of the camps, as well as the relationships that prisoners had with one another, with their guards, and with professional criminals who lived beside them.

A vital addition to the literature of this era,annotated for a generation that no longer remembers the Soviet Union, Gulag Voices will inform, interest, and inspire, offering a source for reflection on human nature itself.


Praise For Gulag Voices: An Anthology (Annals of Communism Series)…

“The power of Gulag Voices is not only to remind us of the horrors of the Soviet Union’s corrective labour institutions and to honour those who were incarcerated there. It is also to illuminate the human consequences that ensue when any state’s legal system fails to recognise the human rights of prisoners.”—Wendy Slater, Times Literary Supplement
— Wendey Slater

“[Gulag Voices] will inform a generation fortunate enough to be living in different times.”—Mary Dejevsky, The Independent
— Mary Dejevsky

“Applebaum….is the ideal editor, providing introductions to each account, as well as a general explanation of the Gulag system. Her selection, each depicting a different aspect of Gulag life, leaves an unforgettable impression.”—Anthony Beevor, The Mail on Sunday
— Anthony Beevor

“…Applebaum has performed an invaluable service…. She has put together a marvellous collection of memoirs, stories and reminiscences written by surviving Gulag inmates ranging from the 1920’s when Lenin opened camps in the first days after the Revolution, to the late 1970’s, a time when most Westerners, as well as Russians, presumed that such places no longer existed.”—Victor Sebestyen, The Spectator
— Victor Sebestyen

“A shocking mosaic of misery, of courage and of just about unimaginable resilience – this anthology brings together first-hand accounts of what it took men and women to survive. A disturbing and yet, in its way, inspiring book.” Michael Kerrigan, The Scotsman, 19th March 2011
— Michael Kerrigan

"Anne Applebaum, who had plumbed the archives to great effect in her Pulitzer Prize-winning book Gulag: A History (2003), persuasively argues in the introduction to Gulag Voices that the profoundly personal perspective of Gulag memoirists . . . mean[s] that their works—valuable as both 'literature and testimony'—serve a 'moral and didactic' purpose as well as an historical one. . . . Works such as Gulag Voices encourage historical understanding and moral catharsis and should be welcomed by Russians and Westerners alike."—Daniel J. Mahoney, The New Criterion
— Daniel J. Mahoney

"'A journey into an incredibly rich and sharp recollection of feelings and emotions… The memoirs of these authors take the reader far beyond the duty of memory towards the dead, into the depths of the human heart where, as Solzhenitsyn disclosed when he wrote The Gulag Archipelago, 'the line separating good and evil passes.'" The Global Journal, June 2012
— The Global Journal

Anne Applebaum is Director of Political Studies at the Legatum Institute. Her book Gulag: A History won the 2004 Pulitzer Prize for nonfiction as well as numerous other awards. She lives in Warsaw, Poland.
Loading...
or support indie stores by buying on
(This book is on backorder)