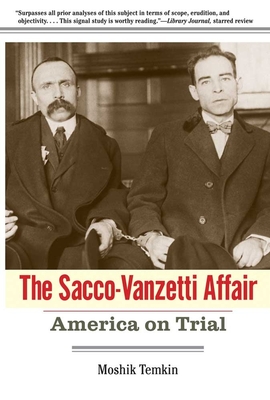 What began as the obscure local case of two Italian immigrant anarchists accused of robbery and murder flared into an unprecedented political and legal scandal as the perception grew that their conviction was a judicial travesty and their execution a political murder. This book is the first to reveal the full national and international scope of the Sacco-Vanzetti affair, uncovering how and why the two men became the center of a global cause célèbre that shook public opinion and transformed America’s relationship with the world.

Drawing on extensive research on two continents, and written with verve, this book connects the Sacco-Vanzetti affair to the most polarizing political and social concerns of its era. Moshik Temkin contends that the worldwide attention to the case was generated not only by the conviction that innocent men had been condemned for their radical politics and ethnic origins but also as part of a reaction to U.S. global supremacy and isolationism after World War I. The author further argues that the international protest, which helped make Sacco and Vanzetti famous men, ultimately provoked their executions. The book concludes by investigating the affair’s enduring repercussions and what they reveal about global political action, terrorism, jingoism, xenophobia, and the politics of our own time.

Moshik Temkin is an assistant professor at Harvard University’s Kennedy School of Government.

Praise For The Sacco-Vanzetti Affair: America on Trial…

“This most recent study . . . surpasses all prior analyses of this subject in terms of scope, erudition, and objectivity. Timely given the contemporary attacks America faces abroad for its policies and justice system, this signal study is worthy reading.”—Gilles Renaud, Library Journal, starred review
— Gilles Renaud

“This exemplary international history reveals for the first time the full scope and multiple meanings of the Sacco-Vanzetti affair."—Richard Wightman Fox, University of Southern California

"In contrast to others who have written about the Sacco and Vanzetti case in the U.S., Temkin sets the Affair and responses to it in a genuinely transatlantic context. In so doing he makes an original and distinctive contribution to his subject."—Tony Judt, New York University
— Tony Judt

"More than 80 years after Italian immigrant anarchists Nicola Sacco and Bartolomeo Vanzetti were electrocuted by the Commonwealth of Massachusetts, the Sacco-Vanzetti case continues to confound, fascinate, and even outrage. . . . Kennedy School Professor Temkin examines how. . . the Sacco-Vanzetti case turned into the Sacco-Vanzetti affair. . . . This is a fresh look at an enduring controversy and a reminder that modern ambivalence about American power has deep roots."—Booklist
— Booklist

"Temkin's original contribution is to set the case of Sacco and Vanzetti in international context, and he does so in engaging and energetic fashion."—Sarah Farmer, University of California, Irvine

“What could possibly have united so many unlikely bedfellows in support of a pair of radical anarchists? Why did Sacco and Vanzetti attract so much attention given the much more widespread injustices done to black Americans in the criminal justice system? Why did a cause that gained so much national and international support ultimately fail? And what does the case tell us about relations between the United States and the rest of the world between the wars? Moshik Temkin does a brilliant job answering these questions. And in his answers, it turns out, lie the roots of the current controversy over America’s war on terror.”—David Cole, London Review of Books

“Moshik Temkin has written a brilliant contribution. . . . The Sacco-Vanzetti Affair is a remarkable achievement, a serious book about a sensational subject.”—French Politics

“Moshik Temkin has written an engaging book on the political impact and debates spawned by the Sacco and Vanzetti affair. In a novel way, he uses them to illuminate the deep socio-political and cultural fissures in American life, which have remained enduring over time.”—Jeremy Kuzmarov, History News Network

“Temkin is explaining. . . how the case of Sacco and Vanzetti influenced this nation's transformation into a world power and stimulated some of the important and ongoing debates about our role in the world community.”—Barbara Berenson, Lawyer's Weekly
— Barbara Berenson

"Temkin explains why the legal and political campaign to save Sacco and Vanzetti was more than just a battle against a judicial murder. . . . As the United States rose to a position of unrivaled industrial and financial prominence, the Sacco and Vanzetti affair was a prism through which the rest of the world might undertand the new emerging global power."—Fraser Ottanelli, The Journal of American History
— Fraser Ottanelli

"Drawing on extensive research on two continents, Moshik Temkin skillfully connects the Sacco-Vanzetti affair to how the wider world was reacting to America's global supremacy and isolation after World War I. . . . A well-written and absorbing read."—Paula Adamick, The Canada Post
— Paula Adamick

"Temkin is at his best when issuing necessary and long overdue correctives concerning the impact of Sacco and Vanzetti's trial and execution in Europe."—Krystyn R. Moon, American Historical Review
— Krystyn R. Moon

“This judicious study adds value to any historical debate on transatlantic relations. It is a must for critical students of the so-called American century in all its reaches.”—Tom Goyens, Labor: Studies in Working-Class History of the Americas
— Tom Goyens
or
Not Currently Available for Direct Purchase
Copyright © 2020 American Booksellers Association