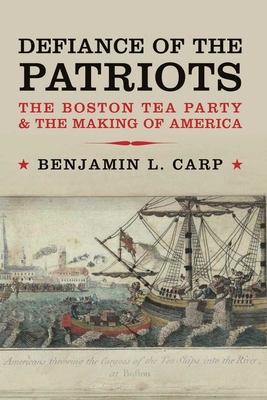 Defiance of the Patriots

The Boston Tea Party and the Making of America

This thrilling book tells the full story of the an iconic episode in American history, the Boston Tea Party—exploding myths, exploring the unique city life of eighteenth-century Boston, and setting this audacious prelude to the American Revolution in a global context for the first time. Bringing vividly to life the diverse array of people and places that the Tea Party brought together—from Chinese tea-pickers to English businessmen, Native American tribes, sugar plantation slaves, and Boston’s ladies of leisure—Benjamin L. Carp illuminates how a determined group of New Englanders shook the foundations of the British Empire, and what this has meant for Americans since. As he reveals many little-known historical facts and considers the Tea Party’s uncertain legacy, he presents a compelling and expansive history of an iconic event in America’s tempestuous past.


Praise For Defiance of the Patriots: The Boston Tea Party and the Making of America…

"A thoughtful, balanced corrective to partisan treatments of the Boston Tea Party."—Maya Jasanoff, The Guardian

"Carp is a historian with a talent for people and place."—David Aaronovitch, The Times

"His vivid reimagining of this weird event evokes the smell of the tea, the creaking of decks and groaning of ropes, and even the ‘satisfying plunk, slap, hiss as the clumps of tea made contact with the water.’"—The Guardian

"Was tea a social elixir or a deadly drug? How do you heft a 400-pound barrel overboard? Myriad questions are raised in this thoughtful look at global economics meeting Beantown's unique society."—American History


"It is arguably the most in-depth, detailed and accessible book on the subject. . . . Carp has created a fascinating look at one of the most famous acts of defiance in history. The book is both a global epic and an intimate look at the people involved and deserves a place on the shelves of anyone interested in the history of the United States."—Darren Jones, The Herald-Dispatch

"A fresh, insightful perspective on why the Boston Tea Party occurred and its outcome...Meticulously researched and rich in detail...a coherent, engaging story."—Christine LaHue, Common-place

"Sophisticated and highly readable, Defiance of the Patriots is a model of research, analysis, and narration that may well be a crossover book, attracting a general readership. It deserves to reach that level of success."—Edward Countryman, Journal of American History

Winner of the 2013 Society of the Cincinnati Cox Book Prize

“Benjamin Carp has written the definitive book on the Boston Tea Party, the epic event that catapulted colonists and mother country toward a war that changed the world.”—John Ferling, author of The Ascent of George Washington


“In this vivid, dramatic and superbly researched book, Benjamin Carp provides fresh insights into important subjects that have long puzzled historians: the collective character of patriot leadership, the marathon meetings of the five thousand Bostonians who deliberated on a course of action and the men who actually did the heavy work of destroying the tea. Essential reading for anyone who takes the American Revolution seriously.”—Alfred F. Young, author of The Shoemaker and the Tea Party: Memory and the American Revolution

Benjamin L. Carp is associate professor of history at Tufts University.
Loading...
or
Not Currently Available for Direct Purchase