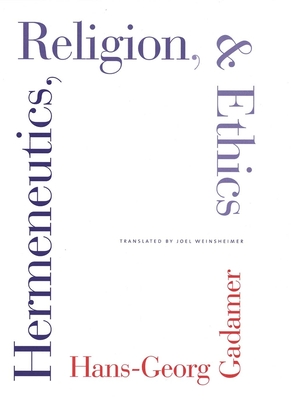 In the years shortly before and after the publication of his classic Truth and Method (1960), the eminent German philosopher Hans-Georg Gadamer returned often to questions surrounding religion and ethics. In this selection of writings from Gesammelte Werke that are here translated into English for the first time, Gadamer probes deeply into the hermeneutic significance of these subjects.

Gadamer raises issues of importance to ethicists and theologians as well as students of language and literature. In such outstanding essays as "Kant and the Question of God," "Thinking as Redemption: Plotinus between Plato and Augustine," and "Friendship and Self-Knowledge: Reflections on the Role of Friendship in Greek Ethics," Gadamer discusses the nature of moral behavior, ethics as a form of knowing, and the hermeneutic task of mediating ethos and philosophical ethics with one another.