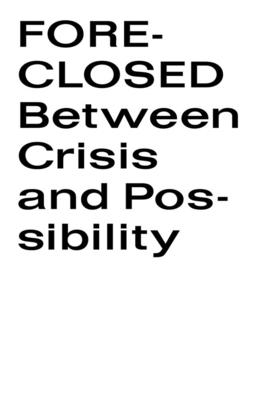 Between Crisis and Possibility

This thought-provoking volume offers a critical reevaluation of the term foreclosure: it can refer not only to a forced eviction but also to processes of exclusion—a shutting down of recognition, reflection, and debate. Through work in photography, film, video, installation, and performance, the seven artists represented in this volume (Kamal Aljafari, Yto Barrada, Tania Bruguera, Claude Closky, Harun Farocki, Allan Sekula, and David Shrigley) investigate the expanded meaning of foreclosure by reexamining the systems that have produced crises, instead of focusing on the aftermath. Four discerning essays from a team of international curators discuss foreclosure as both a generative concept and a curatorial strategy, allowing the text itself to become a platform for critique.

Jennifer Burris is a curator, recently published in The Journal of Aesthetics and Art Criticism and Studies in French Cinema. Sofia Olascoaga is the former director of education and public programs at the Museo de Arte Carrillo Gil in Mexico City. Sadia Shirazi is an architect and curator whose work focuses on the intersection of art, architecture, and urbanism. Gaia Tedone is the former assistant curator for the David Roberts Art Foundation in London.
Loading...
or
Not Currently Available for Direct Purchase