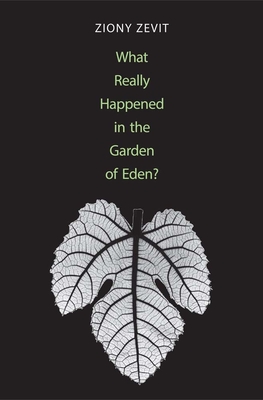 What Really Happened in the Garden of Eden?

The Garden of Eden story, one of the most famous narratives in Western history, is typically read as an ancient account of original sin and humanity’s fall from divine grace. In this highly innovative study, Ziony Zevit argues that this is not how ancient Israelites understood the early biblical text. Drawing on such diverse disciplines as biblical studies, geography, archaeology, mythology, anthropology, biology, poetics, law, linguistics, and literary theory, he clarifies the worldview of the ancient Israelite readers during the First Temple period and elucidates what the story likely meant in its original context.

Most provocatively, he contends that our ideas about original sin are based upon misconceptions originating in the Second Temple period under the influence of Hellenism. He shows how, for Ancient Israelites, the story was really about how humans achieved ethical discernment. He argues further that Adam was not made from dust and that Eve was not made from Adam’s rib.  His study unsettles much of what has been taken for granted about the story for more than two millennia and has far-reaching implications for both literary and theological interpreters.


Praise For What Really Happened in the Garden of Eden?…

"Classical Hebrew in the hands of Ziony Zevit is like a cello in the hands of a master cellist. He knows all the hidden subtleties of the instrument, and he makes you hear them in this rendition of the profoundly simple story of Adam, Eve, the Serpent, and their Creator in the Garden of Eden. Zevit brings a greal deal of other biblical learning to bear in a surprisingly light-hearted book. He is playing in that sense, too. But for me it is the touch of the master in his handling of Hebrew syntax that stands out most. Others can equal him in those other regards. In this one he is without peer."—Jack Miles, author of God: A Biography

"Ziony Zevit’s new book is far more than an exploration of the Garden of Eden narrative alone. Along the way, he leads his readers into a host of related topics: ancient biblical interpretation, Jewish and Christian; the Documentary Hypothesis and modern scholars; feminist readings of the Bible; ancient Near Eastern geography; the development of the Hebrew alphabet; Egyptian garden landscaping; Israelite curse formulae; blood avengers in the biblical world—and, believe it or not, a good deal more. Without ever leaving Eden behind, his book is thus an enticing vade mecum into the various fields that make up modern biblical scholarship."—James Kugel, author of How to Read the BIble
— James Kugel

“Zevit provides a clearly written, learned, and imaginative reinterpretation of the Garden of Eden story. Drawing on his broad knowledge of the Bible, other ancient sources, as well as from modern and medieval biblical scholarship, he tests traditional views while suggesting new ways of understanding this biblical classic.”—Mark Smith, New York University
— Mark Smith


"Zevit’s careful analysis of the Garden Story significantly challenges the traditional interpretation and theological understanding of this pivotal text. All who read this book will deepen their understanding of the biblical text and future studies will have to take Zevit's conclusions into account."—Tremper Longman III, Westmont College

“A model of biblical scholarship that is also wholly accessible to the general reader . . . enlivened by Zevit’s wit and good humor . . .  Artful, charming, and informative.”—Jonathan Kirsch, Jewish Journal
— Jonathan Kirsch

Ziony Zevit is Distinguished Professor of Biblical Literature and Northwest Semitic Languages and Literatures at the American Jewish University in Los Angeles. He is widely recognized for his publications in Hebrew epigraphy, biblical studies, and ancient Israelite religion.