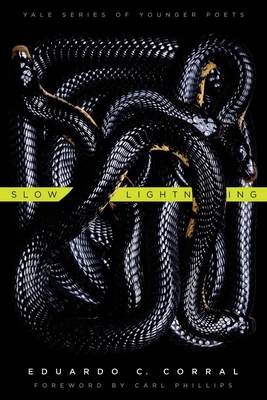 "[Corral] packs many, many lines with sharp, sensual, specific imagery—this is Technicolor poetry."—Booklist

Eduardo C. Corral is the 2011 recipient of the Yale Series of Younger Poets award, joining such distinguished previous winners as Adrienne Rich, W. S. Merwin, and John Ashbery. The first Latino poet to win the competition, Corral is also winner of the 2011 Whiting Writers Award.

Seamlessly braiding English and Spanish, Corral's poems hurtle across literary and linguistic borders toward a lyricism that slows down experience. He employs a range of forms and phrasing, bringing the vivid particulars of his experiences as a Chicano and gay man to the page. Although Corral's topics are decidedly sobering, contest judge Carl Phillips observes, "one of the more surprising possibilities offered in these poems is joy."


From "Self-Portrait with Tumbling and Lasso"

a pistol. My left

"He mixes colloquial Spanish and English, and he packs many, many lines with sharp, sensual, specific imagery—this is Technicolor poetry. . . . Very engaging."—Ray Olson, Booklist

"A classic in the making."—Rigoberto González, El Paso Times

"By any standard, Slow Lightning is an impressive debut, a gathering of powerful and often defiant poems that are paradoxically realized through formal control."—Lambda Literary Review

Winner of the 2011 Whiting Writers Award, as given by the Whiting Foundation

"[W]e can make of what would blind us a conduit for changed vision, suggests Corral. In these poems, a cage implies all the rest that lies outside it; any frame frames a window through which to see other possibilities unfolding. . . . Like Hayden, Corral resists reductivism. Gay, Chicano, 'Illegal-American,' that’s all just language, and part of Corral’s point is that language, like sex, is fluid and dangerous and thrilling, now a cage, now a window out. In Corral’s refusal to think in reductive terms lies his great authority. His refusal to entirely trust authority wins my trust as a reader."—Carl Phillips, from the Foreword

Eduardo C. Corral's poems have appeared in Beloit Poetry Journal, New England Review, Ploughshares, and Poetry, as well as other journals and anthologies. He received a Discovery/The Nation award and was selected for residencies at the MacDowell Colony and Yaddo. He lives in southern Arizona.

Carl Phillips is the award-winning author of eleven books of poetry, including Speak Low, which was a National Book Award finalist. He teaches at Washington University in St. Louis. This is his first year as judge of the Yale Series of Younger Poets.