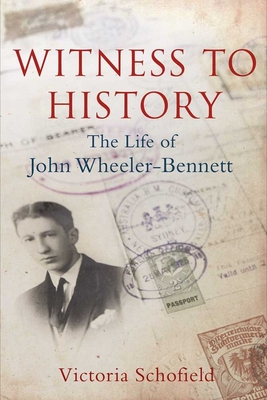 The Life of John Wheeler-Bennett

Historian Sir John Wheeler-Bennett (1902–1975) was one of the twentieth century's most extraordinary political observers. Through an ability to make important connections, he became an authority on Germany in the interwar years and was acquainted with all the German hierarchy, including Hitler and Hindenburg. He was one of the last people to interview Trotsky, writing an important analysis of the Brest-Litovsk Treaty between Germany and the Soviet Union in 1917. As King George VI’s official biographer, he met and interviewed the major leaders of the postwar period, including Churchill, Coolidge, Truman, and members of the British Royal Family. A teacher at the universities of New York, Virginia, and Arizona, he also briefly supervised young Jack Kennedy’s master’s thesis at Harvard.

This first biography of Wheeler-Bennett will fascinate anyone interested in the great political figures of world history during the twentieth century.


Praise For Witness to History: The Life of John Wheeler-Bennett…

'More than just a "witness to history", Jack Wheeler-Bennett was himself a gifted historian, illuminating his work with personal knowledge of many of the protagonists. Intrepid adventurer, skillful journalist, intelligence agent, one of the best informed men on Germany, or USA, and wonderful company, he walked with ease with presidents, kings, queens (and even Kaiser Wilhelm II), charming all down to club porters with his unaffected warmth.  He was one of the outstanding, though unsung, certainly unrepeatable Britons of his age.'— Sir Alistair Horne
— Alistair Horne

“Schofield delivers a complete chronicle of Wheeler-Bennett’s links to the international politics of his time.”—Booklist
— Booklist

Victoria Schofield is an author and journalist specializing in military and Asian history. She is the author of Wavell: Soldier and Statesman, Afghan Frontier: Feuding and Fighting in Central Asia, and Kashmir in Conflict.