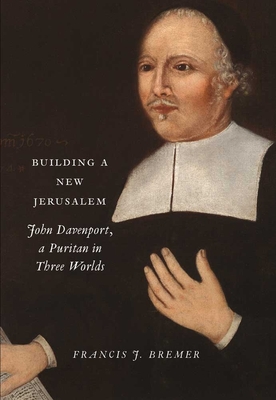 John Davenport, who cofounded the colony of New Haven, has been neglected in studies that view early New England primarily from a Massachusetts viewpoint. Francis J. Bremer restores the clergyman to importance by examining Davenport’s crucial role as an advocate for religious reform in England and the Netherlands before his emigration, his engagement with an international community of scholars and clergy, and his significant contributions to colonial America. Bremer shows that he was in many ways a remarkably progressive leader for his time, with a strong commitment to education for both women and men, a vibrant interest in new science, and a dedication to upholding democratic principles in churches at a time when many other Puritan clergymen were emphasizing the power of their office above all else.

Bremer’s enlightening and accessible biography of an important figure in New England history provides a unique perspective on the seventeenth-century transatlantic Puritan movement.

Francis J. Bremer is professor of history emeritus, Millersville University of Pennsylvania. He has been a fellow at Oxford and Cambridge Universities in England and at Trinity College, Dublin.  He is the author of Puritanism: A Very Short Introduction and a biography of John Winthrop.

Praise For Building a New Jerusalem: John Davenport, a Puritan in Three Worlds…

"This, in short, is a book that anyone interested in Puritanism on either side of the Atlantic would buy and have to read."—Peter Lake, Vanderbilt University
— Peter Lake

“To anyone who thinks that Massachusetts Bay equals ‘New England,’ I say: read this book. To anyone who thinks that John Davenport was unimportant, I say: read this book. You will be enlightened by Francis Bremer’s compelling study of a man who profoundly influenced New England’s early religious and secular history.”—Mary Beth Norton, author of In the Devil’s Snare: The Salem Witchcraft Crisis of 1692
— Mary Beth Norton

"Frank Bremer has written a richly detailed biography of a major figure that retrieves his career on both sides of the Atlantic and throws a fresh light on theology, the making of the Congregational Way, and the building of New England institutions. Anyone interested in the seventeenth-century Anglo-American world can learn from this impressive book."—David D. Hall, Harvard Divinity School
— David Hall

"No one is better qualified than Francis Bremer to excavate the memory of an almost-forgotten pioneer of the first English colonies in North America. The principal founder of an American New Jerusalem, Davenport exhibited a peculiar mixture of obstinate high principle and determination to seek peace and unity which deserves honoring, particularly in an age of American religion which is just as highly politically-charged as his own."—Diarmaid MacCulloch, author of Christianity: The First Three Thousand Years