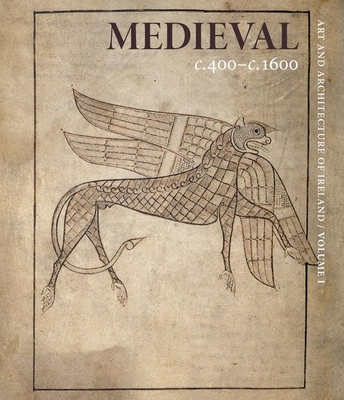 ART AND ARCHITECTURE OF IRELAND is an authoritative and fully illustrated survey that encompasses the period from the early Middle Ages to the end of the 20th century. The five volumes explore all aspects of Irish art – from high crosses to installation art, from illuminated manuscripts to Georgian houses and Modernist churches, from tapestries and sculptures to oil paintings, photographs and video art. This monumental project provides new insights into every facet of the strength, depth and variety of Ireland’s artistic and architectural heritage.

MEDIEVAL c. 400-c. 1600
An unrivalled account of all aspects of the rich and varied visual culture of Ireland in the Middle Ages. Based on decades of original research, the book contains over 300 lively and informative essays and is magnificently illustrated. Readers will enjoy expanding their knowledge of medieval Ireland through explorations of the objects and buildings produced there and the people who created them.

Rachel Moss is assistant professor in the Department of History of Art and Architecture, Trinity College Dublin and President of the Royal Society of Antiquaries of Ireland (2013–17). She has published numerous articles on medieval art and architecture and has edited books including Making and Meaning in Insular Art (Dublin, 2007) and Art and Devotion in Late Medieval Ireland (Dublin, 2006).