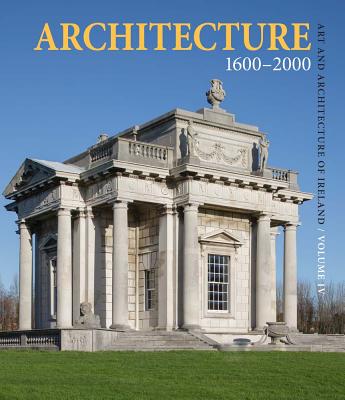 ART AND ARCHITECTURE OF IRELAND is an authoritative and fully illustrated survey that encompasses the period from the early Middle Ages to the end of the 20th century. The five volumes explore all aspects of Irish art - from high crosses to installation art, from illuminated manuscripts to Georgian houses and Modernist churches, from tapestries and sculptures to oil paintings, photographs and video art. This monumental project provides new insights into every facet of the strength, depth and variety of Ireland's artistic and architectural heritage.
ARCHITECTURE 1600-2000
The most complete survey of architecture in Ireland ever published. The essays in this volume cover all aspects of Ireland's built environment, not only buildings but infrastructure, landscape development, public and private construction and much else. The volume challenges and expands the traditional understanding of Irish 'architecture', giving novel and exciting interpretations of the field and, by means of many striking illustrations, encourages us to think anew about the environment that surrounds us.

Rolf Loeber holds professorships at the University of Pittsburgh, where he oversees research on the causes of crime as well as mental health problems in young people. He has published extensively on Irish architecture, the history of fiction, and social, economic and plantation history. Hugh Campbell is professor of architecture at University College, Dublin, where he is currently head of the School of Architecture. He has published extensively on subjects from Irish architecture and urbanism to photography and urban space. Livia Hurley is an architect and architectural historian working in private practice in Dublin. Her research interests include urban history and the study of industrial sites and monuments. John Montague is assistant professor in the College of Architecture, Art and Design at the American University of Sharjah, UAE. His research interests include medieval and early modern architecture, and urban mapping. He is co-author, with Colm Lennon, of John Rocque's Dublin: a Guide to the Georgian City (Dublin, 2010). Ellen Rowley is an architectural historian, researching 20th-century architecture in Ireland and beyond. She has written extensively on architectural modernism and edited a collection of Irish architectural writing: Patterns of Thought (2012). She is a research fellow at Trinity College Dublin.
Loading...
or
Not Currently Available for Direct Purchase