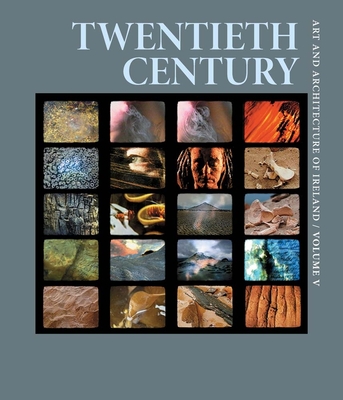 ART AND ARCHITECTURE OF IRELAND is an authoritative and fully illustrated survey that encompasses the period from the early Middle Ages to the end of the 20th century. The five volumes explore all aspects of Irish art – from high crosses to installation art, from illuminated manuscripts to Georgian houses and Modernist churches, from tapestries and sculptures to oil paintings, photographs and video art. This monumental project provides new insights into every facet of the strength, depth and variety of Ireland’s artistic and architectural heritage.

TWENTIETH CENTURY
An examination of the works of art created in twentieth-century Ireland and the critical contexts from which they came. Focusing on painting, photography and new media, rather than on sculpture, this volume considers the work of conceptual and digital artists as well as those who have used more traditional approaches. Definitive biographies of many of the key artist of the era are included, and the volume also addresses the main political and social issues that lay behind twentieth century Irish art. Through its many fine illustrations, it recreates the vibrancy of the art world of the period.

Catherine Marshall is an art historian, curator, and critical writer. She was appointed as first head of collections at the Irish Museum of Modern Art in 1995, and adviser to the Arts Council’s Touring Experiment. Peter Murray is director of the Crawford Art Gallery, Cork, and a member of the National Council of Cultural Institutions. He has published widely, in addition to curating many exhibitions of 20th-century and contemporary Irish art.