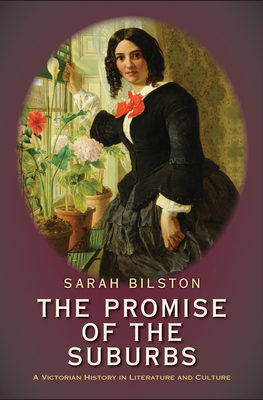 The Promise of the Suburbs

A Victorian History in Literature and Culture

A study of the fast-growing Victorian suburbs as places of connection, creativity, and professional advance, especially for women

Literature has, from the start of the nineteenth century, cast the suburbs as dull, vulgar, and unimaginative margins where, by definition, nothing important takes place. Sarah Bilston argues that such attitudes were forged to undermine the cultural authority of the emerging middle class and to reinforce patriarchy by trivializing women’s work. Resisting these stereotypes, Bilston reveals that suburban life offered ambitious women, especially writers, access to supportive communities and opportunities for literary and artistic experimentation as well as professional advancement. Bilston interprets both familiar figures (sensation novelist Mary Elizabeth Braddon) and less well-known writers (including interior design journalist Jane Ellen Panton and garden writer Jane Loudon) to reveal how women and society at large navigated a fast‑growing, rapidly changing landscape. Far from being a cultural dead end, the new suburbs promised women access to the exciting opportunities of modernity.


Praise For The Promise of the Suburbs: A Victorian History in Literature and Culture…

“Sarah Bilston’s engaging The Promise of the Suburbs: A Victorian History in Literature and Culture rehabilitates the long-derided suburbs as a locus of creativity, upward mobility, and women’s self-fashioning. . . . This useful work contributes to both women’s history and urban studies.”—Pamela K. Gilbert, Studies in English Literature

“The Promise of the Suburbs is a well-researched, and highly readable study, with a judicious selection of illustrations.”—Nicholas Daly, English Literature in Translation

“Bilston’s book has much to recommend it . . . . [It] adroitly sketches the contradictory characterizations of suburbia as tasteless, reiterative, and aspirational in ways that both illuminate nineteenth-century discourse and gesture implicitly to its significant legacies.”—Andrea Kaston Tange, Victorian Studies


“The Promise of the Suburbs reveals that, far from enforcing oppressive conformity, the suburbs offered diverse social interactions, opportunities for female professionalism, and new ideas about domestic space and urban modernity. This impressive book is a must-read for anyone interested in mid-Victorian culture.”—Talia Schaffer, Queens College, CUNY, and Graduate Center, CUNY

“No other book carries the analysis of suburban writing and writing about suburbia as far or as fascinatingly as Bilston has achieved here. I learned a lot from reading this book.”—Annette Federico, James Madison University

"Sarah Bilston’s book is a revelation, one that overturns conventional assumptions of suburbia’s sterility to reveal a site of diversity, sociability, and widened opportunities for women. It is essential reading."—Linda K. Hughes, Texas Christian University

"In this compelling account of Victorian suburbia, Bilston completely overturns our preconceptions.  The suburbs, she demonstrates, were not dull and stultifying, but a site of self-invention, social experimentation, and creativity."—Kate Flint, University of Southern California

Sarah Bilston is professor of literature at Trinity College. She is the author of The Awkward Age in Women’s Popular Fiction, 1850-1900 and two novels, Bed Rest and Sleepless Nights.
Loading...
or
Not Currently Available for Direct Purchase