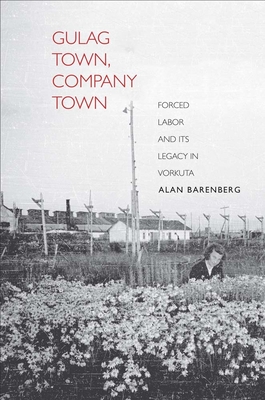 This insightful volume offers a radical reassessment of the infamous “Gulag Archipelago” by exploring the history of Vorkuta, an arctic coal-mining outpost originally established in the 1930s as a prison camp complex. Author Alan Barenberg’s eye-opening study reveals Vorkuta as an active urban center with a substantial nonprisoner population where the borders separating camp and city were contested and permeable, enabling prisoners to establish social connections that would eventually aid them in their transitions to civilian life. With this book, Barenberg makes an important historical contribution to our understanding of forced labor in the Soviet Union and its enduring legacy.

Alan Barenberg is assistant professor of history at Texas Tech University. He lives in Lubbock, TX.

"Gulag Town is a pioneering work of history, offering a major new reconceptualization of the Gulag. The story of the development of Vorkuta, a major Stalinist “company town” and site of forced labor, serves to re-integrate the history of the Gulag into the history of the Soviet Union, demonstrating the complex symbiosis between Stalinist repression and Soviet “internal colonization.”--Lynne Viola, author of The Unknown Gulag: The Lost World of Stalin’s Special Settlements
— Lynne Viola

“A gripping and highly readable account of the rise and decline of Vorkuta, a cold, isolated Gulag town where forced labourers were sent to live and die alongside guards, administrators, and former prisoners.” - Mark Harrison, editor of Guns and Rubles: the Defense Industry in the Stalinist State
— Mark Harrison

"In this fascinating book Alan Barenberg explores the myriad personal and economic links that tied the labor camp complex of Vorkuta to the emerging civilian mining town, and he shows how, after Stalin, the town was able to draw on its camp legacy by offering an important space for former inmates to be reabsorbed into Soviet society."- Yoram Gorlizki, University of Manchester
— Yoram Gorlizki

Honorable Mention, Wayne S. Vucinich Book Prize for the most important contribution to Russian, Eurasian, and East European studies in any discipline of the humanities or social sciences, Association for Slavic, Eastern European, and Eurasian Studies, 2015.

“Barenberg has produced a fascinating study of a Gulag town, Vorkuta, in which he analyzes the connection between the prison and nonprisoner populations during the 1930s and beyond.”—Choice
— Choice
or
Buy Here
Copyright © 2020 American Booksellers Association