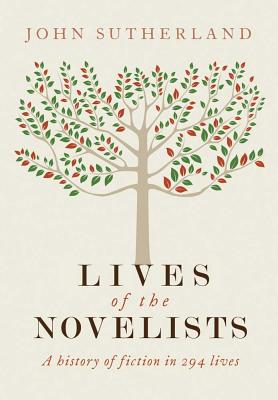 Lives of the Novelists

A History of Fiction in 294 Lives

In the spirit of Dr. Johnson’s Lives of the Poets, acclaimed critic and scholar John Sutherland tours the history of fiction in English

No previous author has attempted a book such as this: a complete history of novels written in the English language, from the genre's seventeenth-century origins to the present day. In the spirit of Dr. Johnson’s Lives of the Poets, acclaimed critic and scholar John Sutherland selects 294 writers whose works illustrate the best of every kind of fiction—from gothic, penny dreadful, and pornography to fantasy, romance, and high literature. Each author was chosen, Professor Sutherland explains, because his or her books are well worth reading and are likely to remain so for at least another century. Sutherland presents these authors in chronological order, in each case deftly combining a lively and informative biographical sketch with an opinionated assessment of the writer's work. Taken together, these novelists provide both a history of the novel and a guide to its rich variety. Always entertaining, and sometimes shocking, Sutherland considers writers as diverse as Daniel Defoe, Henry James, James Joyce, Edgar Allan Poe, Virginia Woolf, Michael Crichton, Jeffrey Archer, and Jacqueline Susann.

Written for all lovers of fiction, Lives of the Novelists succeeds both as introduction and re-introduction, as Sutherland presents favorite and familiar novelists in new ways and transforms the less favored and less familiar through his relentlessly fascinating readings.


Praise For Lives of the Novelists: A History of Fiction in 294 Lives…

"A worthy successor to Dr. Johnson’s Lives of the Poets: John Sutherland is witty, incisive, idiosyncratic, and has the keenest of eyes for the telling detail. While recounting the stories of so many fascinating authors, Lives of the Novelists also offers a memorable portrait of a critical life devoted to reading and writing."—James Shapiro, Professor of English, Columbia University
— James Shapiro

"John Sutherland is among the handful of critics whose every book I must have. He’s sharp-eyed and sharp-tongued, with a generous heart and a wise head. This self-assured and knowledgeable survey of novels in English is invaluable as both a reference work and, wonderfully, a book to savor."—Jay Parini
— Jay Parini

“Tremendously exhilarating . . . you can read Sutherland for fun as well as for (cultural) profit. . . . Lives of the Novelists might look like an academic tome, but it reads like one of those unputdownable blockbusters you take to the beach.”—Michael Dirda, Washington Post
— Michael Dirda

"This is one of the most delightful books of its kind I know. . . . there is so much acute intelligence, wit and wisdom in this epic shlep
through biographical vaudeville that scandal and outrage sit cheek by jowl with Freudian resonance and Johnsonian acuteness. . . . I think old Sam Johnson would be pleased that one of his descendants had written a reference book as engaging, shrewd, witty and irresistible to contemporary tastes as this one.”—Jeff Simon, Buffalo News
— Jeff Simon

“Sutherland's writing is just plain delightful . . . [and] the body of knowledge this book reflects is astounding. . . . It tells the story of the people who've told our culture's stories, high and low and otherwise, for 2-1/2 centuries.”—Carolyn Kellogg, Los Angeles Times
— Carolyn Kellogg

"A tremendously exhilarating book . . . less a work of scholarship than it is a catalogue of pleasures . . . By its heft, Lives of the Novelists might look like an academic tome, but it reads like one of those unputdownable blockbusters you take to the beach."—Michael Dirda, Washington Post
— Michael Dirda

“Sutherland excels with his unexpected inclusions. . . . consider passing copies along to friends who are readers . . . we’ve been offered a starting point for many hours of literary discussions.”—John McIntyre, Daily Beast
— John McIntyre

“This chatty, companionable, undogmatic tome . . . leaves one with the happy feeling that there are no human activities more worthwhile than writing and reading novels.”—New Yorker
— New Yorker

“This is a fabulous book—it's impossible to stop at just one biography.”—Marilyn Dahl, Shelf Awareness
— Marilyn Dahl

"This is one of those books you can open to any page and start reading. . . . His publisher calls it 'opinionated,' and I call it a reference book that rocks."—Florence King, National Review
— Florence King

“Sutherland’s book is at once far more entertaining, more informative, and more personal than the standard product. Everything in Sutherland comes with an edge.”—John Wilson, Commonweal
— John Wilson

“Nibble at this large volume randomly, or gobble it up from beginning to end, and either way you'll come upon nuggets of wry humor. The tone is entertaining throughout [and] rich with anecdotes . . . and there's nary a wasted word.”—Susan K. Perry, Psychology Today
— Susan K. Perry

John Sutherland is Emeritus Lord Northcliffe Professor of Modern English Literature at University College London and a former long-time faculty member at the California Institute of Technology. He is author of over 20 books, editor of 30 more, and a regular columnist and critic on radio and television. He lives in London.
Loading...
or
Not Currently Available for Direct Purchase