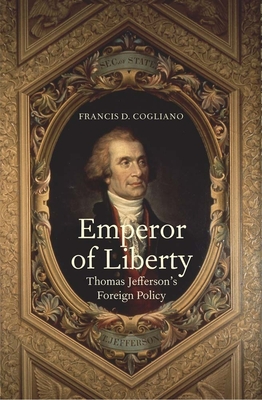 This book, the first in decades to closely examine Thomas Jefferson’s foreign policy, offers a compelling reinterpretation of his attitudes and accomplishments as a statesman during America’s early nationhood. Beginning with Jefferson’s disastrous stint as wartime governor of Virginia during the American Revolution, and proceeding to his later experiences as a diplomat in France, Secretary of State, and U.S. Vice President, historian Francis Cogliano considers how these varied assignments shaped Jefferson’s thinking about international relations. The author then addresses Jefferson’s two terms as President—his goals, the means he employed to achieve them, and his final record as a statesman.

Cogliano documents the evolution of Jefferson’s attitudes toward the use of force and the disposition of state power. He argues that Jefferson, although idealistic in the ends he sought to achieve, was pragmatic in the means he employed. Contrary to received wisdom, Jefferson was comfortable using deadly force when he deemed it necessary and was consistent in his foreign policy ends—prioritizing defense of the American republic above all else. His failures as a statesman were, more often than not, the result of circumstances beyond his control, notably the weakness of the fledgling American republic in a world of warring empires.

Francis D. Cogliano is professor of American history and Dean International for North America, University of Edinburgh. He is author of Thomas Jefferson: Reputation and Legacy and editor of Companion to Thomas Jefferson. He lives in Edinburgh, UK.

"Cogliano portrays a Jefferson who is typically Jeffersonian in the way that maddens many scholars: he is neither the ideologue whom critics sometimes mock, nor a mere realist with no faith in America's republican potential. In a world where messy details often weigh equally with great principles, Cogliano’s Jefferson takes the long view of American national interests, while also dealing with difficult day-to-day situations. This is a remarkably well-balanced book—and one that Jefferson himself might admire."—Jack N. Rakove, Stanford University
— Jack N. Rakove

"With keen insight and in lucid prose, Frank Cogliano deftly explores the canny interplay of pragmatism and ideology in Jefferson's statecraft. Emperor of Liberty illuminates the enduring synergy between rhetoric and interest in the international exercise of American power.”—Alan Taylor, author of The Internal Enemy: Slavery and War in Virginia, 1772-1832
— Alan Taylor

“Emperor of Liberty is a masterful study of Thomas Jefferson's foreign policy over the course of his long and eventful public career. It reveals Jefferson not as a starry-eyed idealist, but as a realistic statesman pragmatically advancing his vision of a republican empire. With its global perspective and vivid case studies, the book will be invaluable not only in courses about the early republic, but for anyone interested in the evolution of American foreign affairs.”—Joanne B. Freeman, Yale University
— Joanne B. Freeman

“Incomparably the best study of Jeffersonian statecraft, offering fresh perspectives on Jefferson’s approach to foreign policy and his attitudes toward presidential power and republican government. . . . It will be the standard study in its field.”—Peter Onuf, University of Virginia
— Peter Onuf
or
Not Currently Available for Direct Purchase
Copyright © 2020 American Booksellers Association