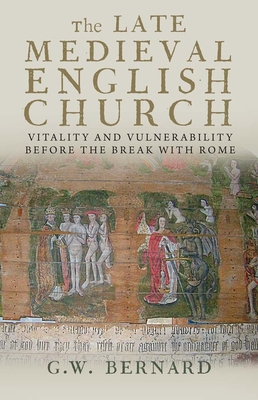 Vitality and Vulnerability Before the Break with Rome

The later medieval English church is invariably viewed through the lens of the Reformation that transformed it. But in this bold and provocative book historian George Bernard examines it on its own terms, revealing a church with vibrant faith and great energy, but also with weaknesses that reforming bishops worked to overcome.

Bernard emphasizes royal control over the church. He examines the challenges facing bishops and clergy, and assesses the depth of lay knowledge and understanding of the teachings of the church, highlighting the practice of pilgrimage. He reconsiders anti-clerical sentiment and the extent and significance of heresy. He shows that the Reformation was not inevitable: the late medieval church was much too full of vitality. But Bernard also argues that alongside that vitality, and often closely linked to it, were vulnerabilities that made the break with Rome and the dissolution of the monasteries possible. The result is a thought-provoking study of a church and society in transformation.

George Bernard is professor of early modern history at the University of Southampton. He lives in Southampton, England.
Loading...
or
Not Currently Available for Direct Purchase