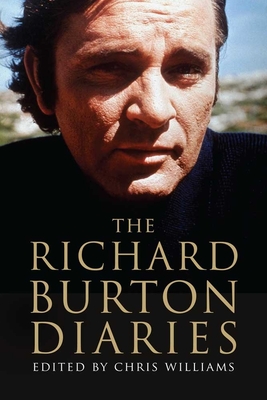 The irresistible, candid diaries of Richard Burton, published in their entirety for the first time

Irresistibly magnetic on stage, mesmerizing in movies, seven times an Academy Award nominee, Richard Burton rose from humble beginnings in Wales to become Hollywood's most highly paid actor and one of England's most admired Shakespearean performers. His epic romance with Elizabeth Taylor, his legendary drinking and story-telling, his dazzling purchases (enormous diamonds, a jet, homes on several continents), and his enormous talent kept him constantly in the public eye. Yet the man behind the celebrity façade carried a surprising burden of insecurity and struggled with the peculiar challenges of a life lived largely in the spotlight. This volume publishes Burton's extensive personal diaries in their entirety for the first time. His writings encompass many years—from 1939, when he was still a teenager, to 1983, the year before his death—and they reveal him in his most private moments, pondering his triumphs and demons, his loves and his heartbreaks. The diary entries appear in their original sequence, with annotations to clarify people, places, books, and events Burton mentions. From these hand-written pages emerges a multi-dimensional man, no mere flashy celebrity. While Burton touched shoulders with shining lights—among them Olivia de Havilland, John Gielgud, Claire Bloom, Laurence Olivier, John Huston, Dylan Thomas, and Edward Albee—he also played the real-life roles of supportive family man, father, husband, and highly intelligent observer. His diaries offer a rare and fresh perspective on his own life and career, and on the glamorous decades of the mid-twentieth century.


Praise For The Richard Burton Diaries…

"Come to this volume for the love story, stay for the lit talk. . . .Burton’s diaries, published now for the first time, are filled with . . . pocket-size delights. . . But I admired this complicated and fairly remarkable book for its deeper and more insinuating qualities as well.”—Dwight Garner, The New York Times

"The Richard Burton Diaries. Just great fun, and written out of an engaging, often comical bewilderment: How did a poor Welshman become not only a star, but a player on the world stage that was Elizabeth Taylor’s fame? As a kind of celebrity Pilgrim’s Progress, it is very tender without missing the fact that show business is hard."—Hilton Als, NewYorker.com
— Hilton Als

“Of real interest is that Burton was almost as good a writer as an actor, read as many as three books a day, haunted bookstores in every city he set foot in, bought countless books on every conceivable subject and evaluated them rather shrewdly. . . Apt writing abounds. . . His love of language is also displayed dazzlingly in the recurrent loving tributes to Elizabeth. True, he also records their fights, but these are quickly forgotten by him after a good walk, and by both of them after a night’s sleep. Much more frequent and pertinent are the love declarations.” —John Simon, The New York Times Book Review
— John Simon

“The Richard Burton who emerges from these diaries is a far better man than even his wildest fan might have expected. He’s so sensitive, intelligent, deeply well-read and supremely well-informed that you can almost kid yourself he’d have been fun to have to dinner. It would be absurd, of course, to call his a model life. But nobody who has read this book could call it a wasted one.” —Christopher Bray, The Wall Street Journal
— Christopher Bray

"The inspiring, salacious, sad, materialistic, insecure, arrogant, hilarious and dull ruminations of a most gifted actor. . . . A text that thrums with life and assures the rest is not silence."—Kirkus Review, starred review
— Kirkus Reviews

"The words reveal someone who is reflective and thoughtful and someone who engaged intellectually with the world around him. It's not just the ale-and-women kind of image… His diaries reveal a man who thought deeply about the world - past, present and future. Richard Burton was in search of 'what it all meant', but found little comfort in the lessons of history… In 1970 he wrote: 'I love the world but if I take it too seriously I shall go mad.'"—Simon de Bruxelles, The Times (London)
— Simon de Bruxelles

"Richard Burton's private diaries are being published for the first time, including passionate descriptions of Elizabeth Taylor as 'a wildly exciting lover-mistress' and 'beautiful beyond the dreams of pornography.'"—Sam Marsden, Daily Mail (London)
— Sam Marsden

"Richard Burton diaries reveal actor's passion and shame. He was the boy from the Welsh valleys whose rugged looks and voice of gold made him a star of stage and screen… He is frank about his drinking, his ambivalent feelings towards his own talent and the career that brought him such success."—londonwired.co.uk
— londonwired.co.uk

"Stand back! Sally Burton just lit a literary firecracker and tossed it into the room. The widow of Britain's greatest film actor is presiding over the long-awaited publication of her late husband's diaries and they are beyond explosive."—Christopher Wilson, Daily Telegraph (London)
— Christopher Wilson

“One might well suppose that Mr. Burton had no interests other than gossip, money, drink and sex. In fact, there's quite a bit more to ‘The Richard Burton Diaries’ than that. Among other things, Mr. Burton turns out to have been an exceedingly literate man who had shrewd opinions about the many books that he read.”—Terry Teachout, Wall Street Journal
— Terry Teachout

“I have to say that, even in this culture when we seem to get too much information on celebrities, there’s something about the words on these pages that’s really fascinating.”—Matt Lauer, NBC TODAY
— Matt Lauer

“How many other working actors, epic drinkers and chronicled jet-setters would have offhandedly used the word “sanguicolus” (living in the blood) in a diary? Here in what is, hands down, one of the great entertainment books of 2012, you’ve got the enthralling results of more than two years of hard labor by editor Chris Williams melding the on-again, off-again diary of his era’s most fascinating failure, a man almost universally lamented by peers for never fulfilling his extraordinary gifts, simultaneously a genuinely poetic intellectual and just as genuine vulgarian.”—Jeff Simon, Buffalo News (Editors Pick)
— Jeff Simon

"So many lurid and appalling books have been written about Burton and Taylor that it’s hard to see them plain. The Richard Burton Diaries is, however, true to why tabloid writers flocked to them: It’s a love story so robust you can nearly warm your hands on its flames."—Dwight Garner, The New York Times

“It’s hard to imagine a midcareer actor working today whose diaries will be half as literate or lemony.”—Dwight Garner, The New York Times
— Dwight Garner

“[Richard Burton and Elizabeth Taylor] made ‘a lovely charming decadent hopeless couple,’ as Burton notes, in a characteristically wry and graceful phrase. . . . A captivating story of misplaced success: Burton was a voracious and astute reader who nurtured unfulfilled literary ambitions. Even his greatest acting triumphs were a blow, representing ‘the indignity and the boredom of having to learn the writings of another man.’”—The New Yorker
— New Yorker

"The broody Burton was ambivalent about acting and really wanted to be a writer. He was.” —Judith Stone, More magazine

“A natural storyteller who didn’t care much for getting dates or punctuation exactly right, [Burton] offers a heartfelt inside view of the glamour and tumult that was Liz and Dick.” —People magazine
— People magazine

“He left just this partial, riveting diary, one of the great book left behind by anyone in the acting profession, and piercing evidence that the very famous, the very rich, the men with jewels and yachts may be haunted outcasts who recognize their own type.”—David Thomson, The New Republic
— David Thomson

“His diaries are not those of a man afraid to take a harsh look at himself . . . he is much more likely, in dealing with his fights with Taylor, to record his own bad behavior than hers. Conversely, the diaries are remarkably free of self-congratulation, either for his achievements as an actor or for his great generosity with money.” —Fintan O’Toole, The New York Review of Books
— Fintan O’Toole

"What was [Burton] thinking, this man widely considered his generation's pre-eminent interpreter of Shakespeare? His thoughts come alive in The Richard Burton Diaries, an epic of erudition;” —Carrie Rickey, The San Francisco Chronicle
— Carrie Rickey

"Burton's charisma comes across clearly in The Richard Burton Diaries, a lively collection of the star's diary entries written between 1939 and 1983 and compiled by Chris Williams. . . . The daily musings of Taylor's hubby Nos. 5 and 6 also reveal a profound thinker who read as heartily as he drank, was devoted to his family and loved politics.” —Daniel Bubbeo, Newsday
— Daniel Bubbeo

“This mammoth, unsanitized, and handsomely presented collection of Burton’s innermost thoughts, along with the fascinating minutiae of a huge star’s day-to-day existence, should restore his reputation as one of the most original Hollywood stars of all time.” —Booklist, Starred Review
— Booklist

“The most salient part of The Richard Burton Diaries (now out in paperback from Yale University Press and a far superior 'beach read' to any Revenge Wears Prada folderol) is not the great Welsh actor’s fabled love of language, his stage fright or his splurges on private airplanes and pedigreed jewels for the love of his life, Elizabeth Taylor.”—Alexandra Jacobs, The New York Times
— Alexandra Jacobs

“In these pages—which Burton began when he was fourteen and continued until the year before his death—he strips away the larger-than-life abstraction that he became for the public to reveal a human dimension more complex than any biographer could ever hope to capture. He is sensitive, intelligent, literary, outwardly and inwardly curious, tender, sometimes boorish and spiteful but conscious of fair play, wickedly discerning and funny, surprisingly modest, wildly generous, a delightful gossip, and virtually never boring—something that would have frightened and appalled him.”—Mary Hawthorne, The New Yorker’s “Page-Turner” blog
— Mary Hawthorne