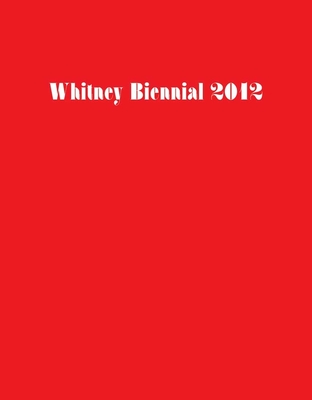 Since its introduction in 1932, the Whitney Biennial—the Museum's signature exhibition and a highly anticipated event in the art world—has charted new developments in contemporary art. Inaugurated by Gertrude Vanderbilt Whitney in 1932, these biennial exhibitions have demonstrated the museum's commitment to supporting the development of 20th- and 21st-century American art.

The 2012 Biennial features works by approximately 50 artists working in a variety of media, including painting, sculpture, photography, film, video, dance, and performance. Elisabeth Sussman (co-organizer of the influential, politically provocative 1993 Whitney Biennial) and Jay Sanders provide an insightful joint essay, and a group of art historians and critics contribute entries on common themes and ideas from the represented artists' techniques and influences. In addition, a significant portion of the catalogue is devoted to original contributions from each of the participating artists, in a unique effort to provide a more experiential understanding of the exhibition.

For more information on the 2012 Whitney Biennial, please visit: http://whitney.org/Exhibitions/2012Biennial

Elisabeth Sussman is curator and Sondra Gilman Curator of Photography at the Whitney Museum of American Art. Jay Sanders is an independent curator and critic.

"This years’ curators, Elisabeth Sussman and Jay Sanders, did something radical: they abolished the standard format—one dreary pedagogic entry per artist, accompanied by one reproduction—and gave each of the participants free reign for six pages. The result is an omnibus of livres d’artistes that, like the biennial proper, rewards repeated immersion."—Andrea K. Scott, The New Yorker, Book Bench blog
— Andrea K. Scott

“The catalogue, typically a by-the-book affair (no pun intended), has matched the show’s experiential adventure, allotting each of the roughly fifty artists six pages for original contributions that extend, rather than merely reflect, the work in the museum..”—Nicole Rudick, Paris Review Daily
— Nicole Rudick

“There's a strong literary proclivity, especially in the catalogue, which includes some extraordinary writing by and about the artists."—Peter Schjeldahl, The New Yorker
— Peter Schjeldahl

“[Her catalog essay] is in fact [Andrea] Fraser’s contribution to the Biennial. And she uses the opportunity to articulate some of the more insidious forms of political hypocrisy and economic complicity that lie hidden in plain view throughout the art world. . .Fraser’s artwork registers as operative rather than moralizing. It’s a cornerstone of the exhibition in so far as it activates the latent political substance of much of the work in the show.” —T Magazine
— T Magazine
or
Not Currently Available for Direct Purchase
Copyright © 2020 American Booksellers Association