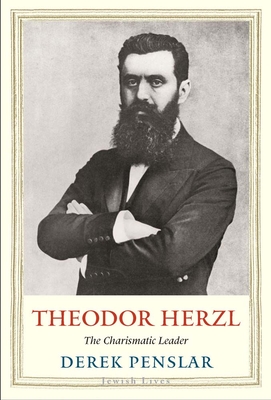 From the prizewinning Jewish Lives series, a masterful new biography of Theodor Herzl by an eminent historian of Zionism

"An engrossing account of a leader who, by converting despair into strength, gave an exiled people both political purpose and the means to attain it."—Benjamin Balint, Wall Street Journal

The life of Theodor Herzl (1860–1904) was as puzzling as it was brief. How did this cosmopolitan and assimilated European Jew become the leader of the Zionist movement? How could he be both an artist and a statesman, a rationalist and an aesthete, a stern moralist yet possessed of deep, and at times dark, passions? And why did scores of thousands of Jews, many of them from traditional, observant backgrounds, embrace Herzl as their leader?

Drawing on a vast body of Herzl’s personal, literary, and political writings, historian Derek Penslar shows that Herzl’s path to Zionism had as much to do with personal crises as it did with antisemitism. Once Herzl devoted himself to Zionism, Penslar shows, he distinguished himself as a consummate leader—possessed of indefatigable energy, organizational ability, and electrifying charisma. Herzl became a screen onto which Jews of his era could project their deepest needs and longings.

"An engrossing account of a leader who, by converting despair into strength, gave an exiled people both political purpose and the means to attain it."—Benjamin Balint, Wall Street Journal

"There is a lot of new information here and it is eloquently stated and wonderfully readable—so much so, that I read it in one sitting and then went back and read it again. This will become an indispensable text to today’s Zionist movement and its thinkers."—Reviews by Amos Lassen

"An excellent, concise biography of Theodor Herzl, architect of modern Zionism. . . . This is an exceptionally good, highly readable volume that will appeal to general readers and specialists alike."—Publishers Weekly, Starred Review

Winner of the 2020 Canadian Jewish Literary Award in the history category, sponsored by the Israel and Golda Koschitzky Centre for Jewish Studies

"Derek Penslar, the most original scholar on the history of Zionism today, has written a masterful book, which may indeed become the definitive Herzl biography of our age."—Michael Brenner, author of A Short History of the Jews

“Theodor Herzl was the indispensable catalyst of the Zionist movement that began before him, developed independently of him, and prevailed on its own decades after his death. Penslar's book unlocks this paradox, and in richly providing the historical context of his leadership, magnifies its achievement.”—Ruth R. Wisse, author of Jews and Power

“Derek Penslar has found in Theodor Herzl an amazingly complex character and tells his story with deep insight and great fairness. This biography is innovative, carefully balanced, and engrossing.”—Tom Segev, author of A State at Any Cost: The Life of David Ben-Gurion

“In his pitch-perfect biography for a new century, accomplished historian Derek Penslar portrays the psychic traits that allowed Theodor Herzl to be elevated by the longings of a fledgling Zionist movement, which he in turn elevated into a political cause that has redefined Jewish and world history down to our present. An elegant masterpiece.”—Samuel Moyn, Yale University

Derek Penslar is the William Lee Frost Professor of Jewish History at Harvard University. His previous books include Jews and the Military: A History and Shylock’s Children: Economics and Jewish Identity in Modern Europe.
Loading...
or
Not Currently Available for Direct Purchase