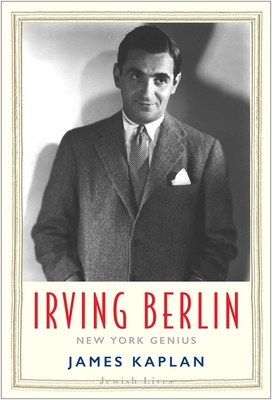 Irving Berlin (1888–1989) has been called—by George Gershwin, among others—the greatest songwriter of the golden age of the American popular song. “Berlin has no place in American music,” legendary composer Jerome Kern wrote; “he is American music.” In a career that spanned an astonishing nine decades, Berlin wrote some fifteen hundred tunes, including “Alexander’s Ragtime Band,” “God Bless America,” and “White Christmas.” From ragtime to the rock era, Berlin’s work has endured in the very fiber of American national identity.

“Empathic. . . . As long as there are hearts to swell, 'Always' and 'How Deep Is the Ocean' will swell them.”—Eric Grode, New York Times Book Review

"Kaplan tells the story briskly and with aplomb, adding plenty of showbiz antics, atmospheric evocations of Berlin’s New York, and shrewd critical passages that separate the musical schmaltz from the art (and find the art in the schmaltz). The result is a smart, entertaining biography of a great songwriter that will have readers humming along."—Publishers Weekly

"Robust and richly rewarding. . . . Kaplan . . . brings his deep knowledge and wise insight to Berlin’s life story so that even his most classic songs like 'White Christmas' feel like a new discovery."—National Book Review

"Kaplan’s book is well-documented and written in an enjoyable, conversational style. One senses on every page Kaplan’s enthusiasm for his subject as well as his deep knowledge. This is the best introduction to Berlin’s life and work."—NY Journal of Books

"Kaplan was aided by the assistance of Berlin’s two elder daughters, and that makes this biography particularly valuable. . . . A good introduction to the composer for the general reader."—Benjamin Sears, Arts Fuse

"An extensively researched, entertaining, and nuanced account that contextualizes Berlin’s story and achievements within the scope of Jewish immigrant New York and modern American popular culture. . . . An excellent addition to the Berlin biographical bookshelf and a mandatory acquisition for all American music and popular culture collections."—Barry X. Miller, Library Journal

“James Kaplan’s Irving Berlin is just like its subject: taut, vibrant, and thrumming with the irresistible words and music of America’s songwriter laureate. It’s by turns a buoyant and poignant trip across the tumultuous 20th century, through the eyes of an artist who helped define its popular taste. Kaplan reclaims the proud Jewish identity of the patriotic immigrant who knew that his country was blessed, because he had been.”—Todd S. Purdum, author of Something Wonderful: Rodgers and Hammerstein’s Broadway Revolution

James Kaplan has been writing noted biography, journalism, and fiction for more than four decades. The author of Frank: The Voice and Sinatra: The Chairman, the definitive two‑volume biography of Frank Sinatra, he has written more than one hundred major profiles of figures ranging from Miles Davis to Meryl Streep, from Arthur Miller to Larry David.
Loading...
or
Not Currently Available for Direct Purchase