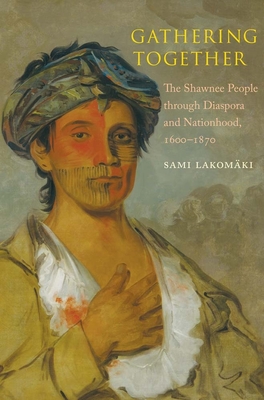 The Shawnee People through Diaspora and Nationhood, 1600–1870 (The Lamar Series in Western History)

Weaving Indian and Euro-American histories together in this groundbreaking book, Sami Lakomäki places the Shawnee people, and Native peoples in general, firmly at the center of American history. The book covers nearly three centuries, from the years leading up to the Shawnees’ first European contacts to the post–Civil War era, and demonstrates vividly how the interactions between Natives and newcomers transformed the political realities and ideas of both groups.

Examining Shawnee society and politics in new depth, and introducing not only charismatic warriors like Blue Jacket and Tecumseh but also other leaders and thinkers, Lakomäki explores the Shawnee people’s debates and strategies for coping with colonial invasion. The author refutes the deep-seated notion that only European colonists created new nations in America, showing that the Shawnees, too, were engaged in nation building. With a sharpened focus on the creativity and power of Native political thought, Lakomäki provides an array of insights into Indian as well as American history.

Praise For Gathering Together: The Shawnee People through Diaspora and Nationhood, 1600–1870 (The Lamar Series in Western History)…

Won an Honorable Mention for the 2014 American Publishers Awards for Professional and Scholarly Excellence (PROSE) in the U.S. History category.
— PROSE

Sami Lakomäki is a university lecturer at the University of Oulu. He lives in Oulu, Finland.
Loading...
or
Not Currently Available for Direct Purchase