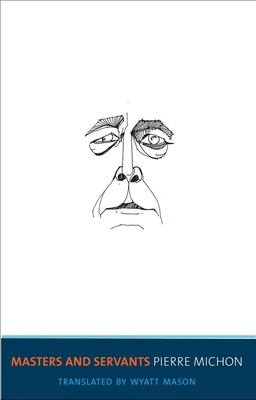 Masters and Servants (The Margellos World Republic of Letters) (Paperback)

Michon focuses on particular moments when artist and model collide, whether that model is a person or a landscape, inner or outer. In the five separate tales he evokes the full passion of the artist’s struggle to capture the world in images even as the world resists capture. Each story is a small masterpiece that transcends national boundaries and earns its place among the essential works of world literature.

Pierre Michon is an author of high acclaim in France and Europe. He was winner of the Prix France Culture in 1984 for his first book, Small Lives, and of the 1996 Prix de la Ville de Paris for his body of work. He lives in France. Wyatt Mason, a contributing writer for the New York Times Magazine and a contributing editor at Harper's, has translated writing by Pierre Michon, Eric Chevillard, Michel de Montaigne, and Arthur Rimbaud. He teaches at Bard College.

Praise For Masters and Servants (The Margellos World Republic of Letters)…

“Michon demonstrates the independence of voice that marks a true writer. . . . His supple prose, dappled with chiaroscuro effects, is used in straight forward chronicles. But his writing can at any time lift or lower into semi-hallucinatory effects that recall Arthur Rimbaud’s assaults on conventional perception.”—Roger Shattuck, The New York Review of Books
— Roger Shattuck

"From the silence of paintings Pierre Michon evokes marvels. A portrait becomes a person of such complex depth as to suggest the mentality of an era. A color becomes an idea. A painting becomes the painter, and words become painting. Most generally, in the flow of Michon's meditations and narratives, the visionary becomes actual, and the actual becomes visionary. These are critical moments to which such names as van Gogh or Goya are attached, names that suggest the poignancy and pathos of art amid the beauty and incoherence and destructive nightmare of life. Wyatt Mason’s translation is excellent in its energy and precision.”

“An incredibly special literary work in that it truly does bring art to life.”—Three Percent
— Three Percent
or
Not Currently Available for Direct Purchase
Copyright © 2020 American Booksellers Association