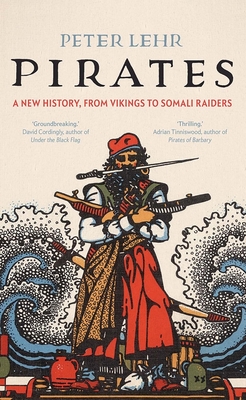 A New History, from Vikings to Somali Raiders

In the twenty-first century piracy has regained a central place in Western culture, thanks to a surprising combination of Johnny Depp and the Pirates of the Caribbean franchise as well as the dramatic rise of modern-day piracy around Somalia and the Horn of Africa.

In this global history of the phenomenon, maritime terrorism and piracy expert Peter Lehr casts fresh light on pirates. Ranging from the Vikings and Wako pirates in the Middle Ages to modern day Somali pirates, Lehr delves deep into what motivates pirates and how they operate. He also illuminates the state’s role in the development of piracy throughout history: from privateers sanctioned by Queen Elizabeth to pirates operating off the coast of Africa taking the law into their own hands. After exploring the structural failures which create fertile ground for pirate activities, Lehr evaluates the success of counter-piracy efforts—and the reasons behind its failures.

Praise For Pirates: A New History, from Vikings to Somali Raiders…

“This is a serious work for a general audience. Policymakers would do well to read it, as would aspiring pirates in search of career advice.”—Frank Lawton, Financial Times

“In this informative and often entertaining short study, Lehr traces the global history of piracy, quoting judiciously from an array of historians and sources to make his case”—Ben Wilson, The Times


"A ground-breaking survey of piracy through the ages. Lehr provides a detailed analysis of the causes of piracy, he reveals the operations of pirates ignored in most previous histories, and he brings a specialist knowledge to recent attacks off Somalia, in the Malacca Straits and in the Gulf of Guinea."—David Cordingly, author of  Under the Black Flag

“The most comprehensive history of piracy I have ever read. And a thrilling read, too!”—Adrian Tinniswood, author of Pirates of Barbary

“A fresh perspective on global piracy through the ages by one of the world's leading experts on maritime security and anti-terrorism. Lehr shoves aside the old temptations of blanket condemnation and cheeky romanticizing to ferret out the timeless patterns at the core of this venerable profession. . . . Pirates is at once a magisterial and instructive book. It is history for our times.”—Kris E. Lane, author of Pillaging the Empire

Peter Lehr is a lecturer in terrorism studies at the Centre for the Study of Terrorism and Political Violence at the University of St Andrews, Scotland. He is the author of Counter-Terrorism Technologies and editor of Violence at Sea: Piracy in the Age of Global Terrorism. He lives in Fife, Scotland.
Loading...
or
Not Currently Available for Direct Purchase