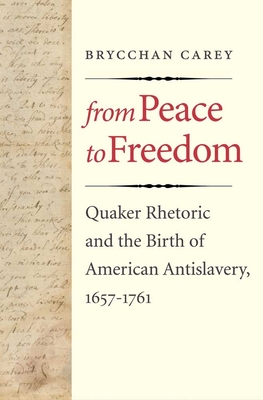 From Peace to Freedom (Hardcover)

Quaker Rhetoric and the Birth of American Antislavery, 1657-1761

In the first book to investigate in detail the origins of antislavery thought and rhetoric within the Society of Friends, Brycchan Carey shows how the Quakers turned against slavery in the first half of the eighteenth century and became the first organization to take a stand against the slave trade.

Through meticulous examination of the earliest writings of the Friends, including journals and letters, Carey reveals the society’s gradual transition from expressing doubt about slavery to adamant opposition. He shows that while progression toward this stance was ongoing, it was slow and uneven and that it was vigorous internal debate and discussion that ultimately led to a call for abolition. His book will be a major contribution to the history of the rhetoric of antislavery and the development of antislavery thought as explicated in early Quaker writing.

Brycchan Carey is currently reader in English literature, Kingston University, London. He is the author of British Abolitionism and the Rhetoric of Sensibility: Writing, Sentiment, and Slavery, 1760–1807.


Praise For From Peace to Freedom: Quaker Rhetoric and the Birth of American Antislavery, 1657-1761…

“This is the book we have been waiting for—a fine-grained exploration of Quaker writings and rhetorical strategies aimed at ending slave trading and slave holding. . . . Carey’s fine book is a ringing endorsement of what Margaret Mead said many years ago: ‘Never underestimate the ability of a few people to change the world; indeed that is the way it always was.’”—Gary B. Nash, University of California, Los Angeles
— Gary B. Nash

“This is a story that has not been told before…a significant accomplishment and contribution to our understanding of Quaker and abolitionist history.”—Laura M. Stevens, University of Tulsa
— Laura M. Stevens

"Brycchan Carey’s From Peace to Freedom is a significant contribution to the historiography of the early transatlantic antislavery movement. Combining lucid rhetorical and literary textual analysis with archival historical research, Carey makes a compelling case for how and why the evolution of Quaker opposition to slavery from 1657 to 1761 laid the necessary groundwork for the seemingly sudden rise of the transatlantic antislavery movement in the last quarter of the eighteenth century and beyond."—Vincent Carretta, University of Maryland
— Vincent Carretta

"Timely and very important, this book demonstrates how over nearly a century Quakers constructed a corporate discourse of anti-slavery and how that discourse became the basis for all later anti-slavery sentiment in America. . . . A model of fine scholarship."—B. P. Dandelion, University of Birmingham
— B. P. Dandelion

“From Peace to Freedom is essential to understanding the origins and impact of antislavery thought in the Society of Friends.”—The Historian
— The Historian
or
Not Currently Available for Direct Purchase
Copyright © 2020 American Booksellers Association