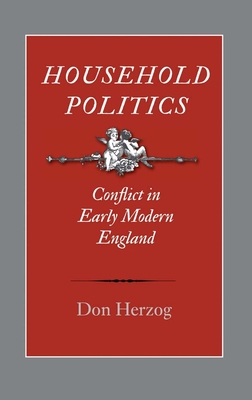 Early modern English canonical sources and sermons often urge the subordination of women. In Household Politics, Don Herzog argues that these sources were blather—not that they were irrelevant, but that plenty of people rolled their eyes at them. Indeed many held that a man had to be an idiot or a buffoon to try to act on their hoary “wisdom.” Households didn’t bask serenely in naturalized or essentialized patriarchy. Instead, husbands, wives, and servants struggled endlessly over authority. Nor did some insidiously gendered public/private distinction make the political subordination of women invisible. Conflict, Herzog argues, doesn't corrode social order: it's what social order usually consists in. He uses the argument to impeach conservatives and their radical critics for sharing confused alternatives. The social world Herzog brings vibrantly alive is much richer—and much pricklier—than many imagine.

Don Herzog is a professor at the University of Michigan Law School.  He is the author of four previously published books.

“This is a stunning performance. . . . The conceptual analysis is, frankly, blazing and passionate, the brilliant observations of a man who has spent his lifetime charting the confusing cross-currents of ideology.”—Blakey Vermeule, Stanford University
— Blakey Vermeule

"It’s early modern England (1650-1750), men are 'public', women are 'private', and patriarchal authority rules triumphant in the land, correct?  Well, no, at least not by the lights that spark and twinkle through Household Politics. Marshaling a mind-boggling array of evidence from hack writers, popular songs, ribald poems, scatological jokes, naughty proverbs, uncouth comedies, murderous stories, speeches, letters, pamphlets, journals, and Jonathan Swift, Herzog takes square aim at a host of academically generated distinctions and gendered shibboleths. These include the stolid construct of 'separate spheres' and the notion that early modern England, with the help of 'conduct books', naturalized a system of patriarchy to which people submitted like sheep. Demolishing that dreary picture with wryly penetrating wit and consummate textual dexterity, Herzog gives us rollicking good proof that, across the landscape of daily English life, controversies over authority’s legitimacy were rife, misogyny was mocked, 'conflict not consensus' was the order of the day, and politics, not patriarchy, governed the household. Cheerfully defiant and politically combative, Household Politics will no doubt give rise to some conflicts of its own.  It’s a wonderfully mischievous little gem of a book."—Mary G Dietz, Northwestern University
— Mary G Dietz, Northwestern University

"This is a delightful, humane book about misogyny and its workings. Herzog isn't afraid to discard academic jargon, the authority of canonical texts, and most of what we think we know about gender and power in the early modern world.  Historians, political theorists, and really anyone interested in fresh thinking about conflict or the nature of the public and the private: Household Politics is for you."—Sophia Rosenfeld, author of Common Sense: A Political History
— Sophia Rosenfeld, University of Virginia
or
Not Currently Available for Direct Purchase
Copyright © 2020 American Booksellers Association