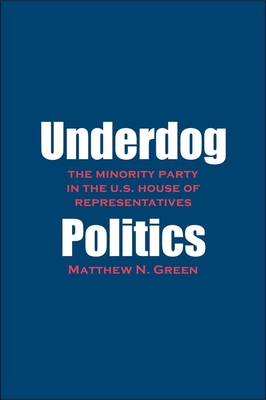 The Minority Party in the U.S. House of Representatives

In this comprehensive analysis, political scholar Matthew N. Green disputes the widely held belief that the minority party in the U.S. House of Representatives wields little or no legislative influence. Green has examined the record of House minority party members from 1970 to the present and offers empirical evidence of their important role in passing or blocking controversial legislation, often through active floor protests, press conferences, obstructionism, and other means. The author explores such spheres of minority influence as fundraising, candidate recruitment, and the shaping of public policy through well-orchestrated campaigns.

In addition to analyzing minority party voting behavior on key floor votes and procedural motions, Green supports his findings through information gleaned from a wide variety of original data, including documents and memos from congressional archives, media accounts, and personal interviews with current and former lawmakers and their staff. The result is the first systematic analysis of what the House minority party can do and why it does it, offering a clear and insightful picture of the inner workings of this famously contentious chamber of Congress.


Praise For Underdog Politics: The Minority Party in the U.S. House of Representatives…

"This book is an excellent and thoughtful examination of the role of the minority party in the House.  With absolutely sound scholarship, Matthew Green makes entertaining and intriguing use of existing literature on Congress, as well as the literature on campaigns, elections, parties, and the media." - William F. Connelly Jr., author of James Madison Rules America
— William Connelly

"Most studies of legislative parties focus, understandably, on the majority, which has most of the power to shape the chamber and its outcomes. Green reminds us that this is only part of the story, and that history is occasionally determined by the strength and creativity of the party with fewer seats." - Seth Masket, author of No Middle Ground: How Informal Party Organizations Control Nominations and Polarize Legislatures
— Seth Masket

Matthew N. Green is associate professor of politics at the Catholic University of America in Washington, D.C., and associate fellow at the Institute for Policy Research and Catholic Studies.
Loading...
or support indie stores by buying on