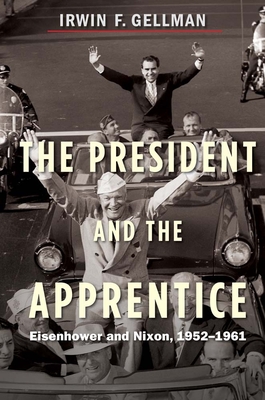 The President and the Apprentice (Hardcover)

Based on twenty years of research, a book that rewrites the history of the Eisenhower presidency

“Irwin Gellman has emerged from years in the archives to tell the fascinating story of President Dwight Eisenhower and his relationship with his vice president, Richard Nixon. Gellman dispels the fog that has long enveloped this subject and casts new light on a critical Cold War presidency. Masterfully written, The President and the Apprentice is a must-read for anyone who, like me, loves good political history.”—Allen Matusow, author of The Unraveling of America

More than half a century after Eisenhower left office, the history of his presidency is so clouded by myth, partisanship, and outright fraud that most people have little understanding of how Ike’s administration worked or what it accomplished. We know—or think we know—that Eisenhower distrusted his vice president, Richard Nixon, and kept him at arm’s length; that he did little to advance civil rights; that he sat by as Joseph McCarthy’s reckless anticommunist campaign threatened to wreck his administration; and that he planned the disastrous 1961 Bay of Pigs invasion of Cuba. None of this is true.

The President and the Apprentice reveals a different Eisenhower, and a different Nixon. Ike trusted and relied on Nixon, sending him on many sensitive overseas missions. Eisenhower, not Truman, completed the desegregation of the military. Eisenhower and Nixon, not Lyndon Johnson, pushed the Civil Rights Act of 1957 through the Senate. Eisenhower was determined to bring down McCarthy and did so. Nixon never, contrary to recent accounts, saw a psychotherapist, but while Ike was recovering from his heart attack in 1955, Nixon was overworked, overanxious, overmedicated, and at the limits of his ability to function.

Based on twenty years of research in numerous archives, many previously untouched, this book offers a fresh and surprising account of the Eisenhower presidency.

“Irwin Gellman’s superb research and plausible reconstruction of the Eisenhower-Nixon relationship may well revolutionize the meaning of historical revisionism. The President and the Apprentice is an unsettling tour de force.”—David Levering Lewis, author of King: A Biography and W.E.B. Du Bois: A Biography, winner of the Pulitzer Prize for Biography

Irwin F. Gellman is an independent scholar. His books include The Contender, an account of Richard Nixon’s time in Congress.

Praise For The President and the Apprentice: Eisenhower and Nixon, 1952-1961…

"Gellman is a prodigious researcher . . . in a fascinating chapter on Nixon’s health, Gellman breaks new ground in understanding the man."—Timothy Naftali, New York Times Book Review
"Gellman . . . is a prodigious researcher. His new book can be mined for many gems about the American presidency, US policies in the 1950s, and the evolution of the cold after Stalin’s death.He also charts the tides, tensions and treacheries of American politics. . . . Future scholars will need to take account of his evidence…. Gellman’s decades of parsing written records earn him the right to remind other writers that “they are supposed to think critically about their sources."—Robert Zoellick, Financial Times
"An important work, and one sure to cause controversy."—Publishers Weekly
"No recent work better delineates the dynamics of the Eisenhower presidency. . . . This is the best-documented, most persuasive account now available of the Eisenhower-Nixon relationship. . . . Essential."—Choice
"Eisenhower’s reputation has recently received more positive reviews, even from liberals, who praise his restraint in foreign policy and, of course, his warnings about the 'military-industrial complex.' His vice president, Nixon, has received no such rehabilitation. . . . Gellman, an independent scholar and writer of four previous books on American presidents, strives mightily here to balance the scales. . . . Although he doesn’t discount Nixon’s character flaws, Gellman asserts that Eisenhower respected Nixon and valued his views on a variety of issues. . . . A worthy effort at reappraisal."—Jay Freeman, Booklist
"Gellman’s take on Nixon restores real balance to the study of the man, and his important role in American politics. This is a deeply researched book using archival and published material. It shows just how intimate [Eisenhower’s and Nixon’s] relationship was, how much Nixon did for Ike, and indeed how Nixon shaped the modern GOP as Ike’s vice president. . . . Nixon, in short, was central to Ike’s widely respected presidency."—Geoffrey Wawro, History Book Club
"Historian Irwin Gellman has a new book out on Ike and Dick. . . . The lessons it offers for 2016 are many and obvious, especially when it comes to running campaigns."—Hugh Hewitt, The Hugh Hewitt Show
"Received orthodoxies are as boring in history as they are in any other field of constant inquiry. . . No matter what the received orthodoxy. . . the field of history only benefits from dissenters consulting the records, marshaling their facts, and making a concerted assault on the ramparts. The process keeps academics on their toes, keeps interpretation from calcifying into cant, and not the smallest thing, very often makes for great reading . . . Irwin Gellman’s new book is as a perfect a case-in-point as the current season is likely to provide."—Steve Donoghue, Open Letters Monthly
"Thanks to this . . . tightly written and magnificently researched volume by Irwin F. Gellman, 20 years in the making . . . Richard Nixon’s eight years as Dwight D. Eisenhower’s vice president are up for reexamination."—John R. Coyne Jr., Washington Times
"[An] illuminating new book."—Jacob Heilbrunn, The National Interest
"Introduces the reader to a Nixon few knew about. . . . A truly unique work of history. . . . An unforgettable read."—John Gizzi, Newsmax
"Readable and extensively researched. . . . The President and the Apprentice should shift the historical assessment of Nixon’s vice presidency considerably. . . . A welcome addition to the scholarship [that] should drive the historiography of Richard Nixon . . . back toward true historical analysis."—Kyle Sammin, The Federalist
“[Gellman] writes with authority. . . . His tome is a monument of scrupulous scholarship.”—Daniel P. Murphy, Journal of American Culture
“The President and the Apprentice does make an important contribution to how scholars understand Nixon and Eisenhower’s relationship. It should encourage more research and analysis of Nixon’s choices as vice president and how he shaped the institution of the vice presidency. It also gives insight into Eisenhower’s priorities and ideas about leadership.”—Zachary Matusheski, H-Net Reviews
Finalist for the 2016 Plutarch Award given by the Biographers International Organization
"The conclusions and research are irrefutable. Gellman is spot-on about Ike’s management style, his and Nixon’s working relationship, his strengths as a bureaucratic leader, his civil rights record, his handling with Nixon of McCarthy, his impact on domestic policy, his handling of the Sputnik episode, and his dominance of and leadership in foreign policy. Overall, a wonderfully succinct summary of very complex stuff.  This will be, hands down, the most important book ever written on Nixon’s vice presidency and his relationship to the president."—David A. Nichols, author of A Matter of Justice:  Eisenhower and the Beginning of the Civil Rights Revolution
"Irwin Gellman, the world's premier Nixon scholar, breaks new ground with his fascinating portrayal of Nixon's unprecedented and still unacknowledged activist vice-presidency and his complicated relationship with a brilliant President Eisenhower. Gellman's narrative is based on his unsurpassed knowledge of a vast array of valuable but often underused source materials."—Melvin Small, author of The Presidency of Richard Nixon
"Irv Gellman gives us a clear and carefully researched look at Ike as a leader and mentor of Richard Nixon. He provides plenty of new material that provides a fresh look at this important relationship."—George P. Shultz, author of Turmoil and Triumph: My Years as Secretary of State
"The President and the Apprentice fulfills its ambitions so successfully that no future study of the Eisenhower-Nixon years can afford to ignore what Gellman has accomplished. His insights illuminate every significant issue from Ike's election in 1952 to the rise of Nixon as his successor, all with awesome scholarship. This is a major work of history and biography."—Herbert S. Parmet, author of Richard Nixon and His America
"The President and the Apprentice is an important, illuminating book. There has been a great deal written about Eisenhower and Nixon in recent years, but none of us has done the archival work done by Irv Gellman, or even close."—Evan Thomas, author of Ike's Bluff