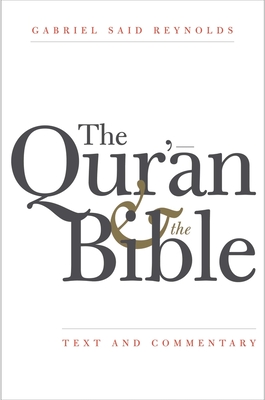 The Qur'an and the Bible

While the Hebrew Bible and the New Testament are understood to be related texts, the sacred scripture of Islam, the third Abrahamic faith, has generally been considered separately. Noted religious scholar Gabriel Said Reynolds draws on centuries of Qur'ānic and Biblical studies to offer rigorous and revelatory commentary on how these holy books are intrinsically connected.

Reynolds demonstrates how Jewish and Christian characters, imagery, and literary devices feature prominently in the Qur'ān, including stories of angels bowing before Adam and of Jesus speaking as an infant. This important contribution to religious studies features a full translation of the Qur'ān along with excerpts from the Jewish and Christian texts. It offers a clear analysis of the debates within the communities of religious scholars concerning the relationship of these scriptures, providing a new lens through which to view the powerful links that bond these three major religions.

Praise For The Qur'an and the Bible: Text and Commentary…

“Enormously helpful as a way not just into an unknown text but into another religious tradition.”—Adam Gopnik, New Yorker

“[A] clear analysis of the debates within the communities of religious scholars concerning the relationship of these scriptures, providing a new lens through which to view the powerful links that bond these three major religions.”—Salzburger Theologischen Zeitschrift journal

“An important resource for anyone who wants to grasp the deep, organic connections between these two sacred books and among the three Abrahamic faiths.”—Bill Tammeus (“Faith Matters” blog)

“[A] rare combination of first-rate scholarship and immense readability. Readers will be fascinated by Reynolds's investigation of the echoes and parallels of familiar Judeo-Christian characters in the unfamiliar setting of the Qur'an's literary world.”—Steve Donoghue, Christian Science Monitor

“A marvelous compilation that will reward repeated consultation, as well as a compelling argument for reading the Qur’an in the context of late antiquity. . . The most valuable aspect of this work is that it enfolds the Qur’an into the ongoing development of biblical tradition.”—F. Volker Greifenhagen, Reading Religion

“[Reynolds] has done a masterful job . . . This book is a great reference for anyone serious about studying the Qur’an to gain an understanding of the relationship between Islam and its Judeo-Christian predecessors.”—Ejaz Naqvi, Christian Century

“A stunningly learned work, bringing together a truly impressive set of written, extra-Qur’anic witnesses and parallels to passages in the Qur’an”—Jack Miles, Los Angeles Review of Books

"Reynolds has written a massive reference work, manifestly useful, and completely unique among those that examine the Qur’an and the Bible together."—David Penchansky, Catholic Biblical Quarterly

"While this is a large volume . . . it is also a valuable one, especially for biblical and qur’anic scholars, as well as for those interested in comparative textual hermeneutics and interpretation."—Jane McAuliffe, Theological Studies

“Bracingly fresh and direct . . . those familiar with older versions will often find themselves invited to new thought about what the Qur’an actually means . . . Massive in size and scope, this is a reasonably priced, legibly printed, and deeply informative study . . . a scholarly resource for those eager to push past stereotypes into the very heart of the Islamic tradition—and to discover its roots in the traditions with which it has always been in tension.”—Luke Timothy Johnson, Commonweal

“Intriguing . . . a profitable place for interfaith dialogue to develop between members of the Abrahamic religions.”—Stephen Burg, Marginalia

“Reynolds does a fine job of identifying and discussing the connections between hundreds of Quran passages and material found in the Bible and elsewhere. . . . [A book of] immense value and usefulness.”—John Kaltner, Journal of the American Oriental Society

“This book fills a gaping hole to revelatory effect. Essential reading for anyone interested in the relationship between the Qur’ān and the religious context of late antiquity.”—Tom Holland, author of In the Shadow of the Sword

"Gabriel Reynolds’s concise commentary on the Qur’ān text offers an indispensable key to many parallel Biblical and para-Biblical traditions and clarifies the Qur’ān’s unique relationship to these earlier traditions and texts."—Fred M. Donner, University of Chicago

“Gabriel Reynolds is one of the world’s leading Qur’ānic scholars, and this learned and readable commentary sheds great light on the religious impulses that shaped Islam at its beginnings and on the relationship between Muslims, Jews, and Christians in Muhammad's day.”—Gary A. Anderson, author of Charity: The Place of the Poor in the Biblical Tradition

“This important and unprecedented book demonstrates that the Qur’ān cannot be fully appreciated without an awareness of its Biblical backdrop.”—Suleyman Dost, Brandeis University

“This major contribution to our understanding of the Qur’ān makes a powerful argument for the profound influence of Biblical traditions, and especially Christian traditions, on the Qur’ān.”—Devin Stewart, Emory University

Gabriel Said Reynolds is professor of Islamic studies and theology at the University of Notre Dame. He is the author of The Qur'ān and Its Biblical Subtext and The Emergence of Islam and the editor of The Qur'ān in Its Historical Context.
Loading...
or support indie stores by buying on