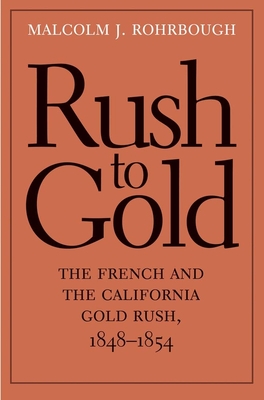 The French and the California Gold Rush, 1848–1854 (The Lamar Series in Western History)

The California Gold Rush began in 1848 and incited many “wagons west.” However, only half of the 300,000 gold seekers traveled by land. The other half traveled by sea. And it’s the story of this second group that interests Malcolm Rohrbough in his authoritative new book, The Rush to Gold. He examines the California Gold Rush through the eyes of 30,000 French participants. In so doing, he offers a completely original analysis of an important—but previously neglected—chapter in the history of the Gold Rush, which occurred at a time of sweeping changes in France. Rohrbough is the author of Days of Gold, which is generally accepted as the essential text on the subject. This new book comes out of his extended research in French archives. He is the first to provide an international focus to these pivotal events in mid-nineteenth-century America. The Rush to Gold is an important contribution to the fast-growing field of transnational American history.

Praise For Rush to Gold: The French and the California Gold Rush, 1848–1854 (The Lamar Series in Western History)…

“We have no work that tracks the migrants from origin to destination and back again with the care of The Rush to Gold. . . . It should also be a staple of graduate reading lists, particularly for those looking for a primer about how to write history that places American events in their worldly context.”—Stephen Aron, UCLA
— Stephen Aron

“The work is completely original. The scholarship, fully resting on primary sources and most impressively on many newspapers from Paris and the provinces, is utterly thorough.”—Walter Nugent, University of Notre Dame
— Walter Nugent

“Just when it seems impossible to say anything new about the California Gold Rush, Malcolm Rohrbough does. By locating the story in both France and California, he reminds us that the Gold Rush came to a world already in the midst of Revolution. There was no single French experience in California, but the collective experience reveals how strange and confusing California was in the late 1840s and early 1850s. This is an intriguing and accomplished book.”—Richard White, Stanford University

Malcolm Rohrbough is professor emeritus at the University of Iowa, specializing in the history of the American West. He is the author of several books.
Loading...
or
Not Currently Available for Direct Purchase