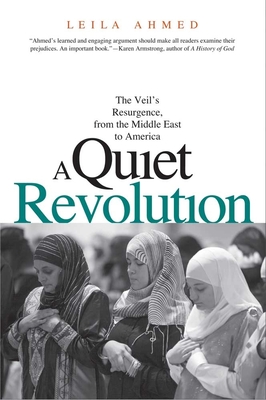 The Veil's Resurgence, from the Middle East to America

In Cairo in the 1940s, Leila Ahmed was raised by a generation of women who never dressed in the veils and headscarves their mothers and grandmothers had worn. To them, these coverings seemed irrelevant to both modern life and Islamic piety. Today, however, the majority of Muslim women throughout the Islamic world again wear the veil. Why, Ahmed asks, did this change take root so swiftly, and what does this shift mean for women, Islam, and the West?

When she began her study, Ahmed assumed that the veil's return indicated a backward step for Muslim women worldwide. What she discovered, however, in the stories of British colonial officials, young Muslim feminists, Arab nationalists, pious Islamic daughters, American Muslim immigrants, violent jihadists, and peaceful Islamic activists, confounded her expectations. Ahmed observed that Islamism, with its commitments to activism in the service of the poor and in pursuit of social justice, is the strain of Islam most easily and naturally merging with western democracies' own tradition of activism in the cause of justice and social change. It is often Islamists, even more than secular Muslims, who are at the forefront of such contemporary activist struggles as civil rights and women's rights. Ahmed's surprising conclusions represent a near reversal of her thinking on this topic.

Richly insightful, intricately drawn, and passionately argued, this absorbing story of the veil's resurgence, from Egypt through Saudi Arabia and into the West, suggests a dramatically new portrait of contemporary Islam.


Praise For A Quiet Revolution: The Veil's Resurgence, from the Middle East to America…

"Ms. Ahmed's narrative deftly captures the mood of the [colonial] era, registering the range of ironies surrounding the status of the veil."—Mira Sethi, Wall Street Journal

". . . an acute study of how issues of political power and empire interact with women’s own claims to autonomy within families and communities. Ahmed beds her analysis into the wider political currents of Egypt without ever losing sight of women’s own interpretations of what they were doing and why."—Madeleine Bunting, The Guardian

"The portrait of post 9/11 Muslim America that Ahmed offers up in her book is strikingly hopeful, full of individuals, trends, and stories that make her case for this new era's promise."—Time Magazine

"The veil may be the most evocative symbol of Islam for many non-Muslim readers, and Ahmed’s treatment of the subject is wide-ranging, discursive, and utterly fascinating."—Library Journal, starred review

"A discerning account of feminists, veiled and unveiled, and their creation of what [Ahmed] sees as a new space within American Islam."—Christine Stansell, New Republic

"A discerning account of feminists, veiled and unveiled, and their creation of what [Ahmed] sees as a new space within American Islam...In delicate passages, Ahmed ventures her own longings for a larger space for women within the faith—for free-spirited inquiry and discussion and a return to the rational interpretation and scrutiny of holy texts. Ahmed finds a distinctly American Islam where women are playing an unprecedented role and gender inequality is often discussed."—Christine Stansell, New Republic

"A Quiet Revolution is an important book.It provides a thorough history of the resurgence of the veil both in the Muslim world and in the U.S. and adds significant nuance to the complex issues that surround the veil. Ahmed's work will no doubt continue to inspire a new generation of Muslim feminists."—Los Angeles Times
"The book's critical and self-consciously feminist perspective makes a valuable contribution to the existing literature."—J. Hammer, Choice

"In this wonderful book, Ahmed explores the complex interrelationships between the use of the veil and social and political contexts. . . . This intimate, very readable book effectively presents issues of women’s life in modern Egypt and America."—Whitney Bodman, Religious Studies Review

"[A Quiet Revolution] . . . can importantly inform feminist contemplations of the veil's meaning and expression of philosophies that are both personal and political."—M. Christian Green, Hypatia

Winner of the 2013 Grawemeyer Award in Religion, given jointly by the Louisville Presbyterian Theological Seminary and the University of Louisville

"Leila Ahmed takes a subject that arouses great emotion, shows how the resurgence of veiling has come about, and explains with great clarity what it means. Ahmed's learned and engaging argument should make all readers examine their prejudices. This valuable and much needed introduction to major trends in the modern Muslim world leads to some novel and surprising conclusions. An important book, it should be required reading for journalists, educationalists, politicians and religious leaders."—Karen Armstrong, Author, A History of God

"Leila Ahmed 's views on women, Islam and Islamism are not only interesting but courageous and need to be read and debated. Her new book brings the critical historical perspective necessary to understand the deep and quiet revolution that is occurring among American Muslims."—Tariq Ramadan, University of Oxford

"A powerful and critically important analysis of the veil’s modern history and reemergence in our time. This is a history Leila Ahmed herself has lived through and witnessed, especially in North America. It is compelling reading for the many readers with questions about the veil and its meanings."—Diana Eck, author of A New Religious America

"What lies behind the phenomenon of Muslim women wearing 'Islamic dress?' Leila Ahmed provides an engaging tour through nationalism, socialism, Islam, and anti-imperialism in her beautifully written book, weaving together the themes of politics, dress, and women’s changing roles with her usual historical and literary skill. A fascinating read."—Jane Smith, Harvard University

Leila Ahmed is the Victor S. Thomas Professor of Divinity at Harvard Divinity School. She is the author of Women and Gender in Islam and A Border Passage: From Cairo to America—A Woman's Journey. She lives in Cambridge, MA.