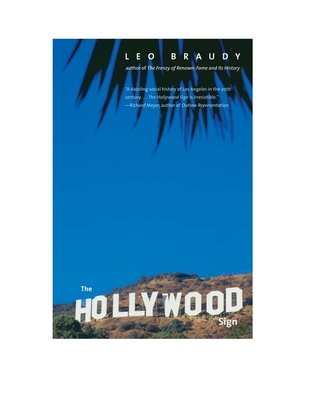 Fantasy and Reality of an American Icon (Icons of America)

Hollywood's famous sign, constructed of massive white block letters set into a steep hillside, is an emblem of the movie capital it looms over and an international symbol of glamour and star power. To so many who see its image, the sign represents the earthly home of that otherwise ethereal world of fame, stardom, and celebrity--the goal of American and worldwide aspiration to be in the limelight, to be, like the Hollywood sign itself, instantly recognizable.

How an advertisement erected in 1923, touting the real estate development Hollywoodland, took on a life of its own is a story worthy of the entertainment world that is its focus. Leo Braudy traces the remarkable history of this distinctly American landmark, which has been saved over the years by a disparate group of fans and supporters, among them Alice Cooper and Hugh Hefner, who spearheaded its reconstruction in the 1970s. He also uses the sign's history to offer an intriguing look at the rise of the movie business from its earliest, silent days through the development of the studio system that helped define modern Hollywood. Mixing social history, urban studies, literature, and film, along with forays into such topics as the lure of Hollywood for utopian communities and the development of domestic architecture in Los Angeles, The Hollywood Sign is a fascinating account of how a temporary structure has become a permanent icon of American culture.

Leo Braudy is among America's leading cultural historians and film critics. He currently is University Professor and Leo S. Bing Chair in English and American Literature at the University of Southern California. He lives in Los Angeles.


Praise For The Hollywood Sign: Fantasy and Reality of an American Icon (Icons of America)…

“Deliciously quirky and intelligent . . . In his irresistible take on the famous sign, Braudy spins a larger metaphor for the culture and history of California itself.”—Joy Horowitz, Los Angeles Review of Books

“This is a magically brief book, written with wit and elegance, on the whole history of Los Angeles and the movies.”—David Thomson, New Republic

“Terrific . . . As I read the book, I marked passages that I thought were particularly interesting, surprising or well-written. Before long I realized I was marking just about everything.”—Geoff Nicholson, San Francisco Chronicle
— Geoff Nicholson

“A rich, far-reaching, gripping history . . . a pithy and sharp little study that is more than just an analysis of this one icon but a larger reflection on the movies in Los Angeles and the implications of that for the place of the movies in our lives.” —Dana Polan, New York University

“Braudy pulls off the difficult feat of writing a substantive book about an elusive American icon. By unearthing the history of the sign--which turns out to be a rich history of real estate, roads, advertising, starlets and, of course, the movies themselves, The Hollywood Sign ends up exploring the enigma of an entirely mythic place.”—Linda Williams, University of California Berkeley

"What Carly Simon claims for James Bond in The Spy Who Loved Me (1977) is equally true of Leo Braudy. Nobody does it better, as this polymathic enquiry so clearly demonstrates in its fusion of erudition, insight, and panache."—Kevin Starr, author of the Americans and the California Dream series

“The story of Hollywood as a place and its evolution into the hub of the movie business is as fascinating as anything in the movies it produced.  Using the sign as both protagonist and reflecting mirror, Leo Braudy provides a mesmerizing account of the shifting fortunes of Hollywood, from the early struggle between Puritans and pleasure-seekers to the emergence of the sign as a pop icon symbolizing the dreams and fantasies of millions. This is movie history from an utterly fresh and kaleidoscopic view.”—Molly Haskell, author of Frankly, My Dear: Gone with the Wind Revisited

“A deftly told and delightfully detailed account of how a humble real estate promotional tool was transformed over the years into an American icon. Leo Braudy's book is not just the story of a bold bit of signage, but of the community and the industry it came to symbolize. It's a must read for anyone interested in the history of a place and a dream. Hooray for The Hollywood Sign."—Richard Schickel, Author of Clint and Conversations with Scorsese

“Leo Braudy, one of our most astute cultural critics and film historians, has produced a wonderful history of this pregnant icon, an analysis of its “metaphysical life,” and an examination of its dissemination as the triumphant yet decadent symbol of America and its dream factory.  In doing so he has given us what is perhaps the best single essay ever written on not just on the sign, but on Hollywood itself.”—Tom Lutz, author of Doing Nothing:  A History of Loafers, Loungers, Slackers and Bums in America

“Though we’ve all seen the Hollywood sign, no one has ever looked at it more beautifully or to better effect than Leo Braudy. With Braudy as expert guide, ‘a word on the side of a steep hill’ opens onto a dazzling social history of Los Angeles in the 20th century.  Like the landmark on which it focuses, The Hollywood Sign is irresistible.”—Richard Meyer, author of Outlaw Representation

“An artful, illuminating and absorbing meditation on a place, an era, an industry, a cast of unlikely characters and a zeitgeist. . . . An instant classic.”—Jonathan Kirsch, Jewish Journal

“Amusing, astute and informative . . . not just about the sign but about Hollywood itself.”—Rob Hardy, Commercial Dispatch (Columbus, Mississippi)

"Braudy's witty, allusive study… uses the famous sign… as a framework on which to string the history of Hollywood itself."—Philip Kemp, Sight and Sound
— Philip Kemp
or
Not Currently Available for Direct Purchase
Copyright © 2020 American Booksellers Association