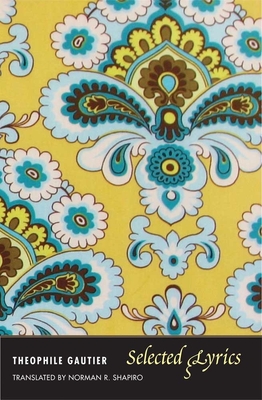 The selected poems of one of the most important nineteenth-century French writers, masterfully translated

In his ABC of Reading, Ezra Pound begins his short list of nineteenth-century French poets to be studied with Théophile Gautier.  Widely esteemed by figures as diverse as Charles Baudelaire, the Goncourt brothers, Gustave Flaubert, Oscar Wilde, Henry James, and T. S. Eliot, Gautier was one of the nineteenth century’s most prominent French writers, famous for his virtuosity, his inventive textures, and his motto “Art for art’s sake.”  His work is often considered a crucial hinge between High Romanticism—idealistic, sentimental, grandiloquent—and the beginnings of “Parnasse,” with its emotional detachment, plasticity, and irresistible surfaces.

His large body of verse, however, is little known outside France.  This generous sampling, anchored by the complete Émaux et Camées, perhaps Gautier’s supreme poetic achievement, and including poems from the vigorously exotic España and several early collections, not only succeeds in bringing these poems into English but also rediscovers them, renewing them in the process of translation.  Norman Shapiro’s translations have been widely praised for their formal integrity, sonic acuity, tonal sensitivities, and overall poetic qualities, and he employs all these gifts in this collection.  Mining one of the crucial treasures of the French tradition, Shapiro makes a major contribution to world letters.


Praise For Selected Lyrics (The Margellos World Republic of Letters)…

“Following Gautier’s instructions in his famous poem, ‘Art,’ Norman Shapiro has sculpted, chiseled, and filed these ingenious translations in the resistant stone of the English language. One of the key poets of the French nineteenth century, revered by Baudelaire and T.S. Eliot, Gautier can now initiate a new generation of readers in English into the mysteries of the poetic art.”—Rosanna Warren, Boston University

“Gautier’s distinctively graceful and elegant poetry is overdue for discovery by English-speaking readers.  This virtuosic collection does both justice to his verse and a great service to those unable to appreciate it fully in the original French.”—Alain Toumayan, University of Notre Dame
— Alain Toumayan

"A key work in the French lyric canon. . . . We are indebted to Norman Shapiro, who is nothing less than the dean of contemporary American translators engaged with French poetry. . . . [His] scholarship is impeccable, his mastery of all facets of the original text is complete, accurate, and precise, and his application of English poetics is not only exemplary in every respect, but above all, vital and vivifying.”—David Lee Rubin, University of Virginia
— David Lee Rubin

Théophile Gautier (1811–1872) was one of the key poets of the French nineteenth century. Norman R. Shapiro is professor of Romance languages and literatures at Wesleyan University and an Officier de l'Ordre des Arts et des Lettres.