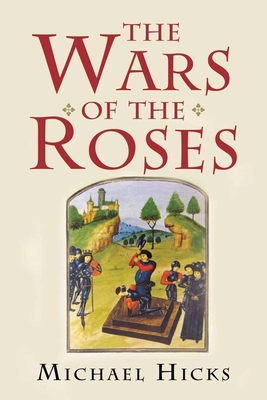 The Wars of the Roses (1455–85) were a major turning point in English history. But the underlying causes for the successive upheavals have been hotly contested by historians ever since. In this original and stimulating new synthesis, distinguished historian Michael Hicks examines the difficult economic, military, and financial crises and explains, for the first time, the real reasons why the Wars of the Roses began, why they kept recurring, and why, eventually, they ceased. Alongside fresh assessments of key personalities, Hicks sheds new light on the significance of the involvement of the people in politics, the intervention of foreign powers in English affairs, and a fifteenth-century credit crunch. Combining a meticulous dissection of competing dynamics with a clear account of the course of events, this is a definitive and indispensable history of a compelling, complex period.


Praise For The Wars of the Roses…

"[a] handsome book – produced to Yale University Press’s customarily beautiful standards – seeks not to trace a single thread but to sketch the whole historical tapestry of the complex and bloody conflicts that convulsed England in the second half of the fifteenth century."—Helen Castor, Times Literary Supplement
— Helen Castor

'A refreshing and stimulating challenge to current orthodoxy about what happened in the middle of the fifteenth century, of which all future accounts will have to take note.' - A J Pollard, author of Warwick the Kingmaker
— A J Pollard

"A well-judged, vigorous and vivid account of England's fifteenth-century civil war, The Wars of the Roses interweaves a strong narrative thread with important analysis to explain the issues on which England's rulers and their rivals vied so often, and with such brutal consequences, between 1450 and 1485. For anyone interested in the personalities and controversies that surrounded the reigns of Henry VI, Edward IV, Richard III and Henry VII, The Wars of the Roses will make vital and compulsive reading." - Mark Ormrod, author of Political Life in Medieval England

"This is both a summation and a groundbreaking book, replete with new insights. It distils the mature expertise and judgments of a leading later medieval historian who has greatly advanced our understanding of the medieval English nobility." - Anthony Goodman, author of The Wars of the Roses: The Soldiers' Experience
— Tony Goodman

“This is a comprehensive account of the period, logically laid out, explaining why the Wars of the Roses were fought and why they ceased.”—Richard Woulfe, Tribune
— Richard Woulfe

"In this impressive book Hicks reinterprets the wars between York and Lancaster and rejects Tudor inevitability."—Desmond Seward, The Tablet
— Desmond Seward

“…this book will be required reading for all serious students of the late-medieval English polity.”—David Grummitt, English Historical Review
— David Grummitt

“….an important and valuable contribution to the canon of literature on the middle years of the 15th century, which will surely take its rightful place on student reading lists everywhere.”—Hannes Kleineke, History Review
— Hannes Kleineke

“…a valuable work of synthesis, and a refreshing, analytical reconsideration of the main issues, together with a clear narrative…He presents a stimulating argument in an important work which clarifies the entire subject in an authoritative fashion.”—Northern History
— Northern History

Michael Hicks is professor of medieval history and head of the Department of History, University of Winchester, and a specialist on late medieval England. He lives in Winchester, UK.
Loading...
or
Not Currently Available for Direct Purchase