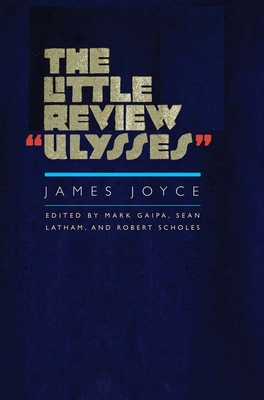 James Joyce’s Ulysses first appeared in print in the pages of an American avant-garde magazine, The Little Review, between 1918 and 1920. The novel many consider to be the most important literary work of the twentieth century was, at the time, deemed obscene and scandalous, resulting in the eventual seizure of The Little Review and the placing of a legal ban on Joyce’s masterwork that would not be lifted in the United States until 1933. For the first time, The Little Review “Ulysses” brings together the serial installments of Ulysses to create a new edition of the novel, enabling teachers, students, scholars, and general readers to see how one of the previous century’s most daring and influential prose narratives evolved, and how it was initially introduced to an audience who recognized its radical potential to transform Western literature. This unique and essential publication also includes essays and illustrations designed to help readers understand the rich contexts in which Ulysses first appeared and trace the complex changes Joyce introduced after it was banned.

Praise For The Little Review "Ulysses"…

"The Little Review "Ulysses" recreates the astonishing experience of reading the Ulysses installments before U.S. censors shut them down. Gaipa, Latham and Scholes are deft guides to a masterpiece in the making. It’s indispensable reading for any serious Joycean."—Kevin Birmingham, author of The Most Dangerous Book: The Battle for James Joyce’s Ulysses

“This canny edition of Ulysses episodes from The Little Review throws revealing light on transatlantic modernism by tracing the intertwined histories of a seminal journal and Joyce’s masterpiece. It reconstructs serial reading by embedding the early versions in their periodical and period contexts while sending us to the 1922 Ulysses with refreshed vision for those who already know it or with sharpened vision for first-time readers.”—John Paul Riquelme, Boston University
— John Paul Riquelme

"More than the shock of recognition, there is a jolt of pleasure, indistinguishable from wonder, in encountering Ulysses as its first intrigued readers would have in the proudly modern pages of The Little Review."—Maria DiBattista, Princeton University

“At last, the very first published version of Ulysses seen by readers, as it appeared in that courageous journal The Little Review. Beautiful presented, its context clearly explained. This is a fascinating vision of the greatest twentieth-century novel in its first public appearance. The excitement radiates off every page. Here is a wondrous artwork’s first outing, skillfully returned to the world.” —Enda Duffy, University of California Santa Barbara

“A beautifully edited volume that allows contemporary readers to experience Ulysses as it was first published in serialization, warts and all. The scholarship is meticulous, helpful, and unobtrusive.” —Sam Slote, Trinity College Dublin

“A treasure - the Ulysses that readers first saw and that a court banned, beautifully presented to help us encounter this work in progress as it unfolded in the Little Review.” —Michael Groden, author of “Ulysses” in Progress and “Ulysses”in Focus

Mark Gaipa is senior editor at the Modernist Journals Project. Sean Latham is Walter Professor of English at the University of Tulsa and editor of the James Joyce Quarterly. Robert Scholes is emeritus professor at Brown University.
Loading...
or
Not Currently Available for Direct Purchase