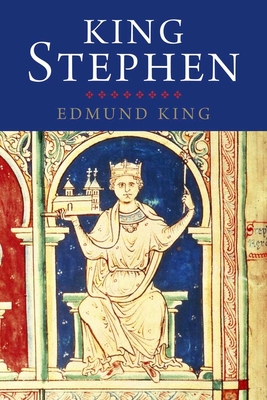 This compelling new biography provides the most authoritative picture yet of King Stephen, whose reign (1135–1154), with its “nineteen long winters” of civil war, made his name synonymous with failed leadership. After years of work on the sources, Edmund King shows with rare clarity the strengths and weaknesses of the monarch. Keeping Stephen at the forefront of his account, the author also chronicles the activities of key family members and associates whose loyal support sustained Stephen’s kingship. In 1135 the popular Stephen was elected king against the claims of the empress Matilda and her sons. But by 1153, Stephen had lost control over Normandy and other important regions, England had lost prestige, and the weakened king was forced to cede his family’s right to succession. A rich narrative covering the drama of a tumultuous reign, this book focuses well-deserved attention on a king who lost control of his destiny.

“Edmund King’s discussion of these issues is the fullest and most detailed to date, offered through the medium of a compelling biography of the king.”—Nigel Saul, History Today
— Nigel Saul

“King is an expert guide, with a forensic eye for detail and a sharp-witted way with an explanation for a 21st-century readership.”—Helen Castor, Times Higher Education
— Helen Castor

'King's strength has always been in the close reading of the texts he uses. He deploys his knowledge of the contemporary authors to great effect, time and again making arresting observations about their individual perspectives and links to events, which adds to the freshness and liveliness of his treatment.' - Reviews in History
— David Crouch

"This is a splendid addition to the English Monarchs series, a piece of thickly descriptive political history at its best. With magisterial command of the sources and contexts, Edmund King takes us on a lively tour of Stephen's castles and courts, his options and dilemmas. It is the story of Matildas, one of them the admirable wife-queen who repeatedly rescued Stephen; of his tumultuous brother Henry; of lesser men who, with the king himself, tried to carry on the work of royal power as public order failed; and of the dynastic and clerical elites that dominated England. Close to his sources, Professor King shows how the violence of castles pervades all these stories. He writes with verve and sympathy. His Stephen, found wanting in the end - although hardly 'as usual' - was no nonentity." - Thomas N. Bisson, Emeritus Lea Professor of Medieval History, Harvard University
— Thomas Bisson

"King has written a masterpiece that reveals how a medieval political community can both consume and then reconstitute itself and offers readers a king emblematic of his truncated, troubled age."—J.P. Huffman, Choice
— J.P. Huffman

In keeping with the high standards of the Yale Monarch series, King has produced an effective account of the man and his reign that will hold up for a long time. His scholarship demonstrates a comfortable familiarity with the era. Successfully scouring the many chronicles, charters, letters and papal correspondence, King has rendered it all in crisp prose.
— Laurence W. Marvin, Berry College, Canadian Journal of History
— Laurence W. Marvin

"An important, indeed invaluable, addition to the English Monarchs series. Based throughout on extensive research in primary sources, complemented by perceptive synthesis, the volume is a tour de force." — Northern History Journal

Edmund King is emeritus professor of medieval history, University of Sheffield. He lives in Sheffield, U.K.