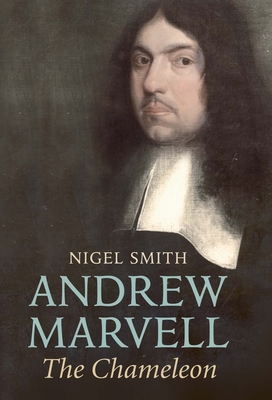 The seventeenth-century poet Andrew Marvell (1621–1678) is one of the most intriguing figures in English literature. A noted civil servant under Cromwell’s Protectorate, he has been variously identified as a patriot, spy, conspirator, concealed homosexual, father to the liberal tradition, and incendiary satirical pamphleteer and freethinker. But while Marvell’s poetry and prose has attracted a wide modern following, his prose is known only to specialists, and much of his personal life remains shrouded in mystery.

Nigel Smith’s pivotal biography provides an unparalleled look into Marvell’s life, from his early employment as a tutor and gentleman’s companion to his suspicious death, reputedly a politically fueled poisoning. Drawing on exhaustive archival research, the voluminous corpus of Marvell’s previously little known writing, and recent scholarship across several disciplines, Smith’s portrait becomes the definitive account of this elusive life.

Nigel Smith is professor of English and codirector of the Center for the Study of Books and Media at Princeton University.


Praise For Andrew Marvell: The Chameleon…

"Superlative. . . . The fullest portrait we have to date."—David Yezzi, The Wall Street Journal
— David Yezzi

"Nigel Smith. . . has certainly mastered everything that can be learned about this elusive, shadowy and very private man."—Michael Dirda, The Washington Post
— Michael Dirda

"Smith asks the right questions about Marvell's life and time, and he works assiduously in helping to lay 'a new foundation of the documentary knowledge.' . . . [A] worthy biography."—Megan Buskey, The New York Times Book Review
— Megan Buskey

"Nigel Smith attends skillfully to the poetry, but he also provides extensive information about the period as well as the complicated development of Marvell's political and religious views. . . . [Smith's] is probably the most complete biography of Marvell we are likely to see."—Jerome Donnelly, America
— Jerome Donnelly

"From reclusive poet to undercover pamphleteer, Andrew Marvell has always been a mystery man. But nobody knows him better than Nigel Smith, who now follows his definitive edition of the poetry with an up-to-date and state-of-the-art biography."—Annabel Patterson, Yale University
— Annabel Patterson

‘Nigel Smith's definitive biography of Marvell is a gripping read, opening up a world of surprisingly intense interactions between poetry and politics in England's most turbulent modern century.  Smith brilliantly illuminates the two sides of Marvell's poetical character--the engaged, parliamentary brawler and controversialist, and the weirdly detached observer of the world--but he also shows how the mysteriousness of Marvell's character resides at last in the very independence and privacy for which Marvell so publicly fought."—Gordon Teskey, Harvard University
— Gordon Teskey

"Rich in detail and impeccably lucid, this remarkable study allows us to understand the subtle poet and elusive politician as we never have before. If Marvell was a mirror to the world, as one of the book's sources says, Nigel Smith is the perfect guide to the mirror and its world, master of the difficult art of looking-glass history."—Michael Wood, Princeton University
— Michael Wood

'The chameleon that emerges from this badly needed, deeply researched study is not just the subtle lyricist familiar from the anthologies but a vigorous verse satirist and an ambitious prose controversialist, whose views still resonate today. Historical sleuthing and literary analysis combine brilliantly in this landmark account - the fullest, most wide-angle picture of Marvell ever produced." —John Kerrigan, Professor of English 2000, University of Cambridge
— John Kerrigan

"The result of Smith’s scholarly close readings is a refreshed and refined sense of Marvell’s poetry, and his biography should be a standard point of reference for future Marvellians."—John Stubbs, Literary Review
— John Stubbs

"It is an achievment of astonishing depth and equally impressive scope, covering a fascinating, complex period of English history. The book is must reading for early modern scholars."—M. Cole, CHOICE
— M. Cole

"Nigel Smith's massive effort . . . obviates the need for any further such survey of Marvell's life and art . . . [Smith's] grasp of seventeenth-century English history, politics, religion, society, is beyond impressive, and he is also a sensitive reader of poetry."—William H. Pritchard, The Hudson Review
— William H. Pritchard

"Smith's meticulous archival research . . . allows a portrait of the young Marvell to form from relatively few life records. . . . Smith is able to identify relationships between [the political ideas of the prose and the depictions of love and sexuality in the lyric poems] in provocative ways."—Curtis Whitaker, Huntington Library Quarterly
— Curtis Whitaker

"A highly laudatory biography of the republican poet who praised regicides, hated Catholics and exposed in memorable verse corruption in those places he chose to investigate."—Contemporary Review
— Contemporary Review
or
Not Currently Available for Direct Purchase
Copyright © 2020 American Booksellers Association