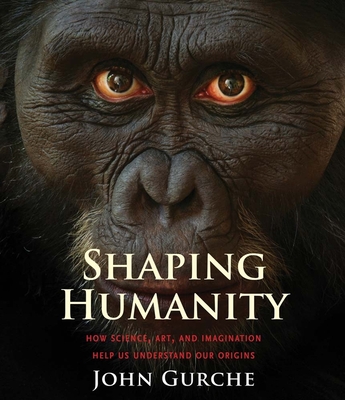 How Science, Art, and Imagination Help Us Understand Our Origins

What did earlier humans really look like? What was life like for them, millions of years ago? How do we know? In this book, internationally renowned paleoartist John Gurche describes the extraordinary process by which he creates forensically accurate and hauntingly realistic representations of our ancient human ancestors.
Inspired by a lifelong fascination with all things prehistoric, and gifted with a unique artistic vision, Gurche has studied fossil remains, comparative ape and human anatomy, and forensic reconstruction for over three decades. His artworks appear in world-class museums and publications ranging from National Geographic to the journal Science, and he is widely known for his contributions to Steven Spielberg’s Jurassic Park and a number of acclaimed television specials. For the Smithsonian Institution’s groundbreaking David H. Koch Hall of Human Origins, opened in 2010, Gurche created fifteen sculptures representing six million years of human history. In Shaping Humanity he relates how he worked with a team of scientists to depict human evolution in sculpture for the new hall. He reveals the debates and brainstorming that surround these often controversial depictions, and along the way he enriches our awareness of the various paths of human evolution and humanity’s stunning uniqueness in the history of life on Earth.

Praise For Shaping Humanity: How Science, Art, and Imagination Help Us Understand Our Origins…

"John Gurche brilliantly brings the long human past alive with his powerful reconstructions of our extinct precursors, and skillfully explains just where the boundaries lie between art and science in his demanding profession."—Ian Tattersall, author of Masters of the Planet: The Search for Our Human Origins
— Ian Tattersall

“John Gurche brings a special and detailed understanding of human and comparative anatomy to his illustrations and sculptures of human relatives and ancestors…what emerges from this very special fusion of science and art is a beautifully illustrated guide to human evolution through an accomplished artist’s hands and eyes. But it is more than that: it also chronicles another uniquely human process, one involving creativity and passion in making art. The total package is an intellectual tour-de-force.”—William Jungers, SUNY Stony Brook
— William Jungers

“There are many books written on human evolution. Shaping Humanity is something different and unusual…there is nothing like it.”—Andrew Hill, Yale University
— Andrew Hill

"John Gurche is one of the great paleoartists of our time.  In this beautifully illustrated book, Gurche's skills are on full display as he, quite literally, puts flesh on the bones of our extinct ancestors and relatives spanning the past seven million years."—Brian G. Richmond, The George Washington University
— Brian G. Richmond

“John Gurche doesn’t just sculpt the various species of early ancestors, he channels them. Shaping Humanity is authoritative yet gentle, objective (in and about a field that is not), and beautifully written.  The illustrations are so breathtaking you will want to put the book on your coffee table, yet its up-to-date and accessible science will be appreciated by anyone interested in the evolution of the human intellectual and creative spark.”—Dean Falk, author The Fossil Chronicles: How Two Controversial Discoveries Changed Our View of Human Evolution
— Dean Falk

“Using gorgeous illustrations and photographs, [Gurche] describes exactly how he draws from studies of modern-day musculature and even his own facial features to turn crumbling skeletons into the evocative sculptures and images that have appeared in museums, magazines, journals and textbooks worldwide.”—Rachel Feltman, Scientific American
— Rachel Feltman

"This coffee-table gem showcases and contextualises 15 of these finely judged creations, representing a span of 6 million years."—Nature
— Nature