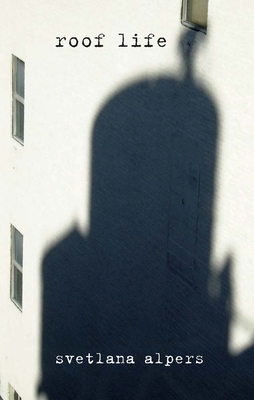 This is not a memoir. It does not take the form of a story. It is instead a kind of self-portrait, or perhaps several self-portraits.

Svetlana Alpers had been keeping files: records of what she saw out the windows of her loft in New York; records of art sold, bought, or seen on her walls; records of foods found in markets and prepared in places where she lived; and records of herself seen in photographs, drawings, and paintings made by others. In solving the question of her father’s place and date of birth, she reconstructs the life of her Russian grandfather in a distant and tumultuous Europe of a century ago.
It was Roof Life that made it all come together. The title refers to what one discovers looking out from high windows with distant and distinctive views. In addition, it refers to the way one's attention is heightened and sharpened by confronting things that are unfamiliar, or that are made to appear unfamiliar by circumstances. It describes the immediacy of distance.
Renowned art historian Svetlana Alpers assembles in these pages descriptions of things that mattered in a life that began in Cambridge, Massachusetts, continued in Berkeley, California, and is now lived in New York City. The experience of Europe informs it all.

Svetlana Alpers is Professor Emerita, History of Art, at the University of California, Berkeley, and visiting scholar at the Department of Fine Arts, New York University. She divides her time between New York City and France.

“Alpers’s latest book of essays is a series of discrete, eloquent meditations on the undervalued act of looking (“That sense of life seen at a distance, and my pleasure in it”) that don’t fall easily into the categories of art history, criticism, or memoir. What connects her stirring personal narratives is this elastic theme of distance: distance as a state of mind (one that is “sharpened by confronting things that are unfamiliar”) and distance as a condition of life . . . resonant, highly original writing.”—Publishers Weekly
— Publishers Weekly

“Resonant, elusive, and enlightening . . . With photographs, [Alpers] reminds us, in a passage that gets at the heart of her strange and stimulating book (and her work as an art historian), place matters most: “not I was there, but there was where I was.” It’s a principle worth including in the psychology—and philosophy—of participants and observers.”—Psychology Today
— Psychology Today

“Alpers writes against the memoir form, creating a meditative self-portrait that pulls in family, literature, geograohy and a lifetime of looking at art. She aims for a kind of omniscience – to fix our attention and focus our responses, as we do when taking in landscapes from a great height. ‘The immediacy of distance’ is her goal.”—New Statesman

“In a world ‘awash in imagery’, Roof Life celebrates the joys and responsibilities of careful looking. . .Alpers has the best of critical gifts. She makes you feel you are standing by her in that West Village loft seeing what she sees, whether the city out of her windows or the art on her walls.”—Edmund Fawcett, The Royal Academy Magazine
— Edmund Fawcett

“Alpers’s latest and most unusual book . . . turns the condition and circumstances of her view into a philosophy of seeing and being in the world . . . Much of the material here is deeply personal. We read harrowing letters of Alpers’s forebears as the recall their flight from the 1905 pogroms in Odessa. We follow her as she inherits, appraises, and sells a small Rothko, only regarding it as a remarkable work of art when it is housed in storage. We accompany her to seasonal farmers’ markets and back to her kitchen and then into her hallway, late at night, where she catches sight of a shadow cast by her naked body on the door. Yet Roof Life is relentlessly anti-memoir, and formidable in its refusal of the confessional mode.”—Bookforum
— Bookforum
or
Not Currently Available for Direct Purchase
Copyright © 2020 American Booksellers Association