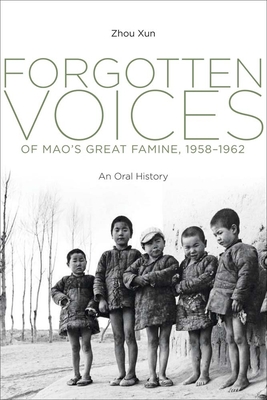 In 1958, China’s revered leader Mao Zedong instituted a program designed to transform his giant nation into a Communist utopia. Called the Great Leap Forward, Mao’s grand scheme—like so many other utopian dreams of the 20th century—proved a monumental disaster, resulting in the mass destruction of China’s agriculture, industry, and trade while leaving large portions of the countryside forever scarred by man-made environmental disasters. The resulting three-year famine claimed the lives of more than 45 million people in China. In this remarkable oral history of modern China’s greatest tragedy, survivors of the cataclysm share their memories of the devastation and loss. The range of voices is wide: city dwellers and peasants, scholars and factory workers, parents who lost children and children who were orphaned in the catastrophe all speak out. Powerful and deeply moving, this unique remembrance of an unnecessary and unhindered catastrophe illuminates a dark recent history that remains officially unacknowledged to this day by the Chinese government and opens a window on a society still feeling the impact of the terrible Great Famine.

“A terrific book. . . . The content is original, authentic and compelling; the first-hand accounts of ‘forgotten voices’ come to life vividly. The author’s personal narrative describing how the interviews were elicited is a fascinating contemporary commentary on the continuing lack of openness in Chinese civil society and the difficulties of getting to the truth, even about events that happened decades ago.”—Gerard Lemos, author of The End of the Chinese Dream: Why Chinese People Fear the Future
— Gerard Lemos

“Anyone who wants to understand what it was like to live through the most horrific man-made famine in history should read this. Zhou Xun has given voice to the kind of people whose views are never heard or reported. It makes you both angry and sad at the same time. It shows how little people even now understood what happened to them or why.”—Jasper Becker, author of Hungry Ghosts: Mao's Secret Famine
— Jasper Becker

“The Maoist regime insisted that the great famine of 1958-1962 was a natural disaster, but it actually resulted from the reckless policies and a pitiless disregard for human life of the regime itself. Zhou Xun’s meticulous and sensitive oral history allows survivors of the famine to tell their stories for the first time. She rectifies a great historic injustice by enabling the victims to put their harrowing ordeal into the historic record.”—Steve Smith, All Souls College, Oxford University
— Steve Smith

“Zhuo Xun is the first Chinese scholar to present oral history accounts of the famine to the English-speaking reader. She deserves great credit for her fearless and sometimes painful collection of these voices. —Felix Wemheuer, Family and Communities History Journal
— Felx Wemheuer

Zhou Xun is a lecturer in modern history at the University of Essex. She is the author of The Great Famine in China, 1958–1962: A Documentary History.
Loading...
or support indie stores by buying on