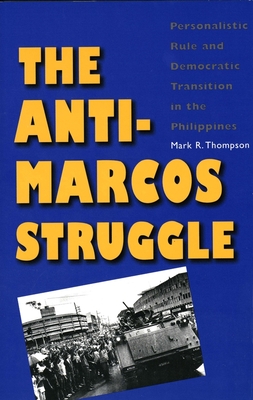 Personalistic Rule and Democratic Transition in the Philippines

The Philippine dictatorship of Ferdinand E. Marcos was characterized by family-based rule and corruption. This sultanistic regime—in which the ruler exercised power freely, without loyalty to any ideology or institution—had to be brought down because Marcos would never step down. In this book Mark Thompson analyzes how Marcos' opponents in the political and economic elite coped with this situation and why their struggle resulted in a transition to democracy through "people power" rather than through violence and revolution.

Based on 150 interviews that Thompson conducted with key participants and on unpublished materials collected during his five trips to the Philippines, the book sheds new light on the transition process. Thompson reveals how anti-Marcos politicians backed a terrorist campaign by social democrats and then, after its failure, joined a "united front" with the communists. But when opposition leader Benigno S. Aquino, Jr., was assassinated in 1983, the politicians were able to draw on public outrage and challenge Marcos at the polls. The opposition's "moral crusade" brought down Marcos and enabled the new president, Corazon C. Aquino, to consolidate democracy despite the troubling legacies of the dictatorship. Thompson argues that the Philippines' long-standing democratic tradition and the appeal that honest government had to the Filipinos were important elements in explaining the peaceful transition process.

Mark R. Thompson is assistant professor of sociology at the Dresden University of Technology, Germany.
Loading...
or support indie stores by buying on