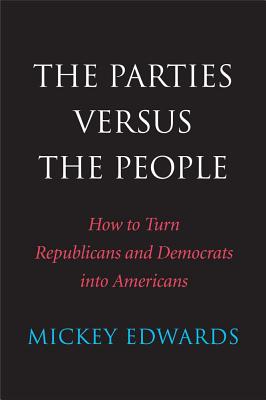 The Parties Versus the People

How to Turn Republicans and Democrats Into Americans

America's political system is dysfunctional. While this is a widely held view, it is a problem that so far has proved intractable. After every election, voters discover yet again that political "leaders" are simply quarreling in a never-ending battle between the two warring tribes, the Republicans and Democrats. In this critically important book, a distinguished statesman and thinker identifies exactly how our political and governing systems reward intransigence, discourage compromise, and undermine our democracy. He then describes exactly what must be done to banish the negative effects of partisan warfare from our political system.

As a former congressman, Mickey Edwards witnessed firsthand how important legislative battles can devolve into struggles not over principle but over party advantage. He offers graphic examples of how this problem has intensified and reveals how political battles have become nothing more than conflicts between party machines. Edwards's solutions specific, practical, fair, and original show the way to break the stranglehold of the political party system. The Parties Versus the People offers hope for a fundamental renewal of American democracy.

Mickey Edwards, a congressman for sixteen years and a faculty member at Harvard and Princeton for the subsequent sixteen years, is a vice president of the Aspen Institute.
Loading...
or
Not Currently Available for Direct Purchase