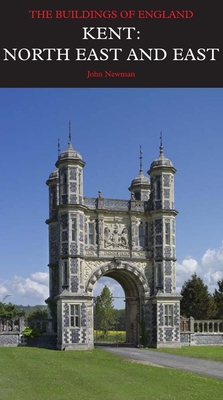 The exceptionally rich architecture of eastern Kent is covered by this fully revised, updated, and expanded edition of John Newman’s classic survey, first published in 1969. This city of Canterbury is the county’s greatest treasure, and its glorious cathedral is the first mature example of Gothic architecture in England. The influence of Canterbury appears also in the remains of St Augustine’s 17th-century mission churches, and in sophisticated Norman carved work at churches such as Barfrestone. Kent is also a maritime county, and its coastal towns are excitingly diverse: the royal stronghold of Dover with its mighty medieval castle; the medieval port of Sandwich; and resorts large and small, from genteel Folkestone to lively Margate, with its bold new art gallery.

'Within four years, Newman had researched and written two volumes on Kent, described by Pevsner as ‘the best of the whole series […] [while also adding] I have nothing but admiration or his perspicacity and his talent for finding the mot juste’. Returning once again to the Kent volumes after nearly four decades in academia at the Courtauld, those capacities which Pevsner identified in Newman remain undiminished and are now matched by the vast experience and expertise of one of England’s most distinguished architectural historians. [This book is] not something new but something mature and wiser’—Owen Hopkins, Burlington Magazine

‘Newman’s prose strikes just the right balance between telling and sharing, combining authority and impulse, and steering deftly between Pevsnerian analysis and Ian Nairn’s evocation of a sense of place. It is just the right style to dip into, to invite distraction. . .Whatever the case, the new edition represents the maturation, not the replacement of the old. Pevsner himself declared that Newman’s Kentish volumes represented ‘the best in the series’; it is hard to disagree.’—Geraint Franklin, Burlington Magazine
— Geraint Franklin

John Newman is the author of several other volumes for the Pevsner Architectural Guides, including Kent: West and the Weald (2012), Shropshire (2006), and Glamorgan and Gwent/Monmouthshire in the Buildings of Wales series.