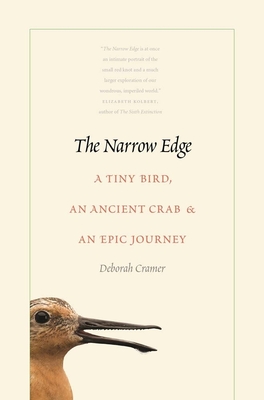 A Tiny Bird, an Ancient Crab, and an Epic Journey

In a volume as urgent and eloquent as Rachel Carson’s Silent Spring, this book—winner of the Southern Environmental Law Center's 2016 Reed Environmental Writing Award in the book category—reveals how the health and well-being of a tiny bird and an ancient crab mirrors our own
Winner of the 2016 Rachel Carson Environment Book Award given by the Society of Environmental Journalists
Each year, red knots, sandpipers weighing no more than a coffee cup, fly a near-miraculous 19,000 miles from the tip of South America to their nesting grounds in the Arctic and back. Along the way, they double their weight by gorging on millions of tiny horseshoe crab eggs. Horseshoe crabs, ancient animals that come ashore but once a year, are vital to humans, too: their blue blood safeguards our health. Now, the rufa red knot, newly listed as threatened under the Endangered Species Act, will likely face extinction in the foreseeable future across its entire range, 40 states and 27 countries. The first United States bird listed because global warming imperils its existence, it will not be the last: the red knot is the twenty-first century’s “canary in the coal mine.” Logging thousands of miles following the knots, shivering with the birds out on the snowy tundra, tracking them down in bug-infested marshes, Cramer vividly portrays what’s at stake for millions of shorebirds and hundreds of millions of people living at the sea edge. The Narrow Edge offers an uplifting portrait of the tenacity of tiny birds and of the many people who, on the sea edge we all share, keep knots flying and offer them safe harbor. Winner of the 2016 National Academies Communications Award for best book that honors the best in science communications. Sponsored by the Keck Futures Initiative—a program of the National Academies of Sciences, Engineering, and Medicine, with the support of the W.M. Keck Foundation


Praise For The Narrow Edge: A Tiny Bird, an Ancient Crab, and an Epic Journey…

"A scientific page-turner, full of intricacies and astonishment. Exhaustively researched and elegantly written, The Narrow Edge is a must for anyone interested in the natural world, our relationship to it, and our stewardship of it."—Philadelphia Inquirer

"[Cramer] writes . . . 'By the end of this journey I am more in awe than when I began.' Follow her graceful writing for the full 9,500 miles and you will share in that awe."—Laurence A. Marschall, Natural History

"Her writing is vivid, novelistic . . . The resulting book is everything a natural history should be."—Living Bird

"The Narrow Edge is not just another lament for a world wrecked by human shortsightedness, though. It is, first and foremost, a deeply moving declaration of love for one particular bird, a love for which the author will spare no effort . . . When Cramer pays tribute to the people who give a voice to the birds and crabs that cannot speak for themselves, her book soars."—Christopher Irmscher, Weekly Standard

"Brilliantly describes the life of a migratory shorebird called a red knot, as it journeys annually from the bottom to the top of the world and back again."—Gary Clark, Houston Chronicle

“[C]arefully translating research into accessible prose . . . Cramer shows us what there once was and what there could be, if we can learn to live in a sustainable way with planet Earth’s other inhabitants.”—Nicholas Bayly, Quarterly Review of Biology

Selected as a 2016 Massachusetts Must Read Book in the Nonfiction category. This recognition is given by the Massachusetts Center for the Book.


"Deborah Cramer has crafted a remarkable tale of science, nature, and humanity. She takes us on a sweeping adventure as she paints the portrait of an unimaginably hardy yet threatened bird."—Susan Solomon, author of The Coldest March

"The Narrow Edge is at once an intimate portrait of the small red knot and a much larger exploration of our wondrous, imperiled world."—Elizabeth Kolbert, author of The Sixth Extinction

"In the face of global warming, is our big brain connected to a big enough heart that we might do something to preserve the beauty of the earth? Heart is no problem for the red knot—20,000 miles on the wing demonstrates that. The finely told story of this bird will, hopefully, help summon greater affection for our home planet.”—Bill McKibben, author of Eaarth

"This book is for anyone who loves adventure: an interwoven tale of humanity and nature in which nature never fails to surprise and delight."—Thomas E. Lovejoy, University Professor of Environmental Science and Policy, George Mason University, and National Geographic Conservation Fellow

"Deborah Cramer provides a unique, first-hand account of a little known and even less appreciated bird. Her adventures with researchers easily take the reader into the world of science and its complex and evolving findings."—John Marzluff, co-author of Gifts of the Crow and author of Welcome to Subirdia

Selected as a 2016 Massachusetts Must Read Book in the Nonfiction category. This recognition is given by the Massachusetts Center for the Book.

Deborah Cramer is the author of Great Waters: An Atlantic Passage and Smithsonian Ocean: Our Water, Our World. She lives in Gloucester, MA.
Loading...
or
Not Currently Available for Direct Purchase