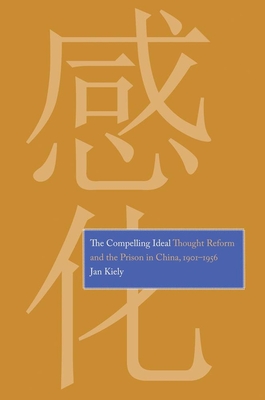 In this groundbreaking volume, based on extensive research in Chinese archives and libraries, Jan Kiely explores the pre-Communist origins of the process of systematic thought reform or reformation (ganhua) that evolved into a key component of Mao Zedong’s revolutionary restructuring of Chinese society. Focusing on ganhua as it was employed in China’s prison system, Kiely’s thought-provoking work brings the history of this critical phenomenon to life through the stories of individuals who conceptualized, implemented, and experienced it, and he details how these techniques were subsequently adapted for broader social and political use.

Praise For The Compelling Ideal: Thought Reform and the Prison in China, 1901-1956…

'Jan Kiely, an American sinologist based at the Chinese University of Hong Kong, shows with admirable clarity that the notion of thought reform, or ganhua, occupied the minds and goals of late Qing dynasty reformers, Japanese penologists, progressive prison wardens during the Republic, Chiang Kai-shek and his son Ching-kuo, Buddhists and of course Mao Zedong even before he came to national power.' —Jonathan Mirsky, THES.
— Jonathan Mirsky

"This is a solid and well-researched study of techniques of re-education and thought reform in Chinese penal institutions in the first half of the twentieth century."—Klaus Muhlhahn, American Historical Review
— Klaus Muhlhahn

"...one cannot fail to be impressed by the beautifully crafted deep history his book provides.  Readers wishing to understand the historical context within which Maoist thought reform later evolved will find this book to be indispensable." —Aminda Smith, China Quarterly Review
— Aminda Smith

Jan Kiely is associate professor of Chinese studies and associate director of the Centre for China Studies at the Chinese University of Hong Kong. He lives in Hong Kong.
Loading...
or support indie stores by buying on